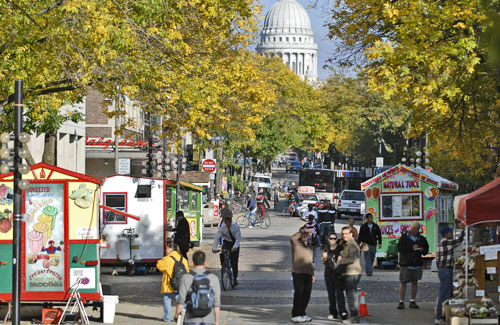 It’s that time of year again, when walking through Library Mall without getting a whiff of something delicious is impossible.

As warm weather hints at a comeback, Madison’s food carts will be coming out in full force to circle Capitol Square and Library Mall, with some new additions to the mouth-watering lineup.

According to  Madison Street Eats, some of the popular food carts returning this season to the streets of Madison include Hibachi Hut, Fried and Fabulous, Thai-riffic, Fine Italian Beef and Banzo.

However, a number of new food carts will also emerge this season.

He said customers can choose from five different types of meat including pâté, chicken, pork chops and barbecue pork, which will all be served on a baguette. Duong owns a restaurant on the West side of Madison called called Phonam Noodle and hopes to attract customers to that restaurant with the food cart.

The local cheeses will be melted on bread from Batch Bakehouse on Williamson Street and served with a side of fire-roasted tomato soup, Criscitiello said.

“One hundred percent of my sales will come from the food cart, so it is exponentially important to me to attract customers,” Criscitiello said.

Due to construction at Library Mall beginning in May, Resnick said he is working to find replacement spots for food carts that currently vend there. He said he hopes to find a new popular location for each displaced cart.

Resnick said the post construction configuration of Library Mall will be optimal for the food carts, as the area will have more seating for customers and more electrical outlets for the trucks.