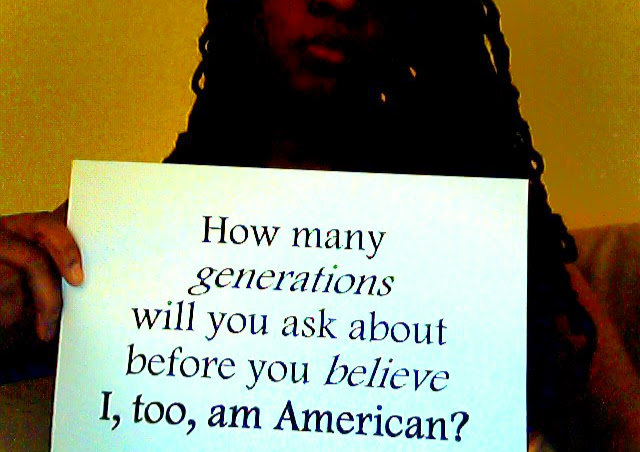 Rivera, a University of Wisconsin senior, was photographed as part of the “I, too, am UW-Madison” Tumblr page. In the photo, she holds a sign that reads, “My culture is not the theme for your dumb party.”

A group of UW students led by Claire Zhuang organized the campaign as a way to raise awareness about microaggressions against ethnic minority students on campus.

Microaggressions are brief verbal, behavioral or environmental exchanges that intentionally or unintentionally communicate negative or insulting slights to marginalized groups in society.

Inspired by Harvard’s “I, too, am Harvard” and the “I, too, am Oxford” campaign at Oxford University, Zhuang, a UW senior, decided to launch a similar project for the Madison campus.

Emily Yee, a contributor to the campaign, said she felt an emotional connection to some of the quotes when she was reading through the Harvard campaign. Yee assisted Zhuang in setting up the Tumblr page and posting photos on the blog.

Zhuang said she started the campaign to let people know that racial discrimination still exists, although it might appear in different forms. Many UW students face these situations on a daily basis, she said.

“I think this is inspiring since it shows a fresh angle of racial stereotypes and might be able to call more attention and enrich the chapter of fighting against racism,”  Max Ma, a UW junior studying journalism, said.

The goal is not to discourage students from talking about racism, but to encourage white students to be more thoughtful, Zhuang said.

“They should just be more conscious of some of the things they are asking before they say them, especially like sensitive identity questions,” she said.

One of their main goals is to represent a variety of multicultural students as the campaign gains popularity on campus, Yee said. The campaign is still developing and students from many underrepresented groups are reaching out to get involved, she said.

Rivera said the campaign helps show ethnic minority students and international students are the same as all degree-seeking students on campus. She said she hopes this campaign will open people’s eyes.

Specifically on UW’s campus, which prides itself on being progressive, tolerant and diverse, there are still a lot of “micro-questions” going on campus, Rivera said.

“Madison may be a very liberal place, but even the ally could still unknowingly pass on the microaggression, and they may not have to think about it, but there are other students going through that everyday,” Rivera said.

Approximately 40 students are active in this campaign, a number that continues to grow, Zhuang said.

While Ma commended the project’s goal, he said he was hesitant to get involved because he does not feel he has been treated differently than his peers on campus based on his ethnicity.

“The campaign is where the minority stands up and speak for themselves. It shows the gut and vitality of non-white students and it helps them communicate their feelings and problems to the masses,” Ma said. “The most encouraging aspect, to me, is that it’s using social media to reach more audience and let them hear what they might have never heard of.”

Zhang also said she sometimes felt her American classmates did not want to make the effort to be friends with her either, although she generally feels she fits in well with the campus community.