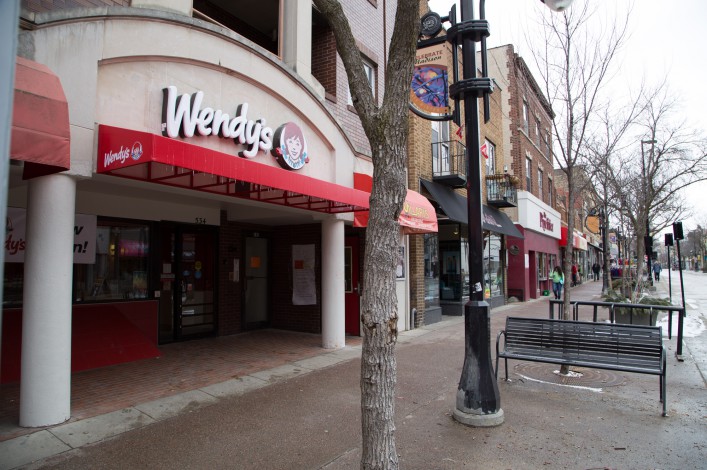 While students flocked to the new Wendy’s on State Street to satiate their Frosty cravings, a group of area students last weekend protested unfair treatment of workers on the farms that produce tomatoes for the chain at its Ohio headquarters.

Nazka Serrano, an Edgewood student, reached out to UW students from several organizations, including MEChA, to protest alongside individuals from the Coalition of Immokalee Workers and Student/Farmworker Alliance against farm labor exploitation.

Serrano is a student member of the Midwest division of SFA, which has several years of experience working with the coalition. The two groups recently began a Midwest tour, stopping on multiple college campuses, to raise awareness about its Fair Food campaign.

CIW is a worker-based human rights organization recognized for its achievements in the fields of corporate social responsibility, community organizing and sustainable food, according to their website.

Serrano said she was invited to attend Encuentro, an event SFA organizes every fall in Immokalee, Fla. where the farmworkers are from, which focuses on engaging students and youth to teach them effective methods of community organizing.

Michelle Castillo is a UW sophomore who attended the protests in Ohio along with Encuentro. She said attending Encuentro was an effective way to learn about community organizing, leading fundraising efforts and running social media campaigns.

Serrano spoke with a worker at the protest about working conditions on the farms.

“People don’t really know that Wendy’s gets their tomatoes this way,” Serrano said. “People don’t think about who picked them or what conditions they were picked in.”

The two workers’ rights groups work closely to spread awareness about the Fair Food Program, which is pushing for pay increases, stricter rules to protect workers and ongoing auditing to ensure compliance from the Florida Tomato Growers Exchange.

Among the top five largest fast food corporations, Wendy’s is the only chain that has not signed on to the program, according to the coalition.

Serrano said SFA is focusing on fundraising and creating awareness about the Fair Food movement. She is also trying to organize social media action and a letter writing campaign to Wendy’s in order to increase pressure on restaurants near Midwest campuses to engage in fair food practices.

Last semester, Serrano and other SFA students gathered on State Street to make an informative video about Wendy’s and she said it went from a video shoot to a small protest.

Currently, Serrano said she is working on other ways to get the voice of SFA to other groups in the Madison area.

“I think a lot of people don’t care just because it’s cheap and it’s fast and it’s good,” Castillo said. “That’s honestly how I view the environment on campus, people don’t really care about those issues because it doesn’t affect them.”

Castillo said she hopes students start thinking of themselves as consumers because when they become aware of these issues they can responsible about what they purchase.