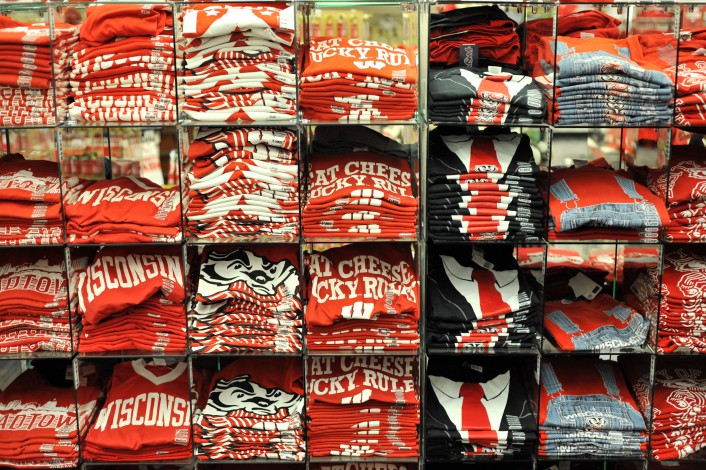 After a factory collapse in Bangladesh killed 1,134 workers last year, the University of Wisconsin is in the process of reviewing workers’ safety in factories around the world that produce clothing emblazoned with Bucky and the Motion W.

UW has 447 licensees producing university branded clothing around the world, and revenue from the items sold brings $3.3 million in to the university annually, according to a UW statement.

While UW did not have anything produced at the factory that collapsed, Chancellor Rebecca Blank said in a recent blog post the university has 21 other licensees that produce clothing in Bangladesh.

According to the statement from the chancellor’s office, UW requires the 21 licensees in Bangladesh to adhere to a code of conduct maintained by the Collegiate Licensing Committee.

Everett Mitchell, director of community relations, said UW’s current code of conduct does not do enough to define the parameters of workers’ safety. UW has recently requested licensees in Bangladesh sign on to either the Accord on Fire and Building Safety or the Alliance for Bangladesh Worker Safety, he said.

Both policies include standards for building inspections, repairs and identifying workplace hazards.

According to a statement from the Chancellor’s office, these two policies are currently not mandated by UW. Survivors of the Rana Plaza collapse requested the university’s Labor Codes Licensing Compliance Committee provide increased support for the policies last Thursday.

However, one survivor, Kalpona Akter, said in a meeting last meeting although the Alliance claims it included workers in their inspections, they have been coached to say certain responses. The workers and their safety are the top concerns of the Accord, but under the Alliance, the workers’ voices were never heard, Akter said.

Seven of the Bangladeshi licensees have already signed the Accord and another has signed the Alliance, the statement said.

Pending upcoming information on effectiveness, these two programs may or may not be mandated in the future, the statement said.

“To be only reactive is to allow tragedies, such as the Rana Plaza building collapse, which killed over 1,100 Bangladeshi workers, to occur,” Everett said. “UW needs to be proactive in preventing such tragedies from occurring.”

He said the two new policies allow UW to not only improve worker safety conditions in UW garment factories, but also to define what workers’ safety means. In the past, UW has defined workers’ safety based on the standards set up by the Bangladeshi government, he said.

UW began a pilot program requiring all UW licensees to make a “good faith” effort to comply with free union regulations in 2006.

In 2010, UW severed its contract with Nike after the closure of several factories in Honduras. In a letter to UW’s Labor Licensing Policy Committee, Martin said Nike had not developed any meaningful ways to address the plight of displaced workers and their families in Honduras.

“[Nike] has not presented clear long-range plans to prevent or respond to similar problems in the future,” Martin said.

The factory collapse in Bangladesh in April 2013 caused UW to realize how bad the worker conditions were in countries like Bangladesh, VanMatre said. It made UW realize that workers’ safety cannot be ignored anymore, she said.

Mitchell said most factories in Bangladesh and developing countries are not the “typical” factories that are present in the United States. Buildings such as houses, apartment complexes or shopping malls can be repurposed and used for factories, he said.

In the past, UW has captured the attention of other big retail companies, Mitchell said. These corporations realize that if nothing is done, the court of public opinion will find them guilty of neglect, he said.