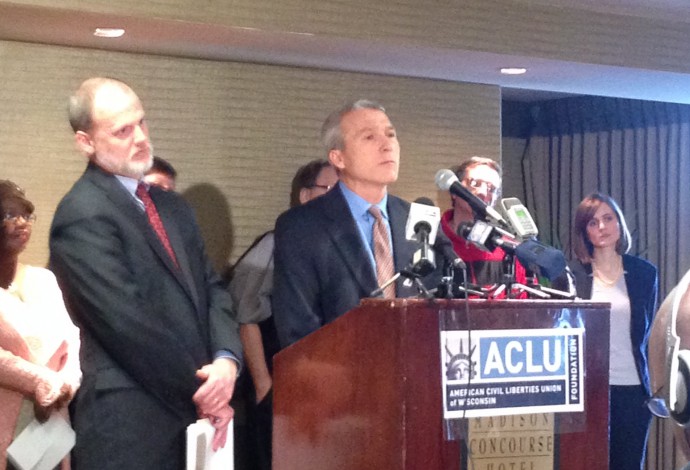 The national ACLU will work with ACLU-Wisconsin and the law firm of Mayer Brown to represent eight plaintiffs, including Roy Badger and his partner Garth Wangemann of Milwaukee; Charvonne Kemp and her partner Marie Carlson of Milwaukee; and Judi Trampf and her partner Katy Heyning of Madison, who were present at the press conference.

“These couples are being denied the basic protections afforded by marriage,” Larry Dupuis, a spokesperson for the ACLU, said. “They only want what every married couple wants: to express their love, commitment in front of friends and family and the security and dignity that marriage provides.”

John Knight, an ACLU attorney, said Wisconsin’s ban on same-sex marriage is especially damaging to same-sex couples, as it bans any type of civil union similar to marriage and criminalizes leaving the state to marry for federal benefits.

Although other states have civil laws that can void out-of-state marriages, Knight said no other state has a marriage evasion clause that criminalizes the action and carries a penalty of up to nine months in prison and/or up to a $10,000 fine.

“I don’t want to take the risk of finding out if we’re going to be prosecuted or not,” Trampf said. “We want the freedom to marry, but we’re not going to break the law in Wisconsin to do that.”

Trampf said the lack of equal benefits for same-sex couples with domestic partnerships directly affected her life when her partner, Heyning, suffered a seizure.

The hospital staff deferred all medical decisions regarding Heyning’s condition to her brother, despite the fact that the two had not seen each other since childhood, and Heyning and Trampf had been in a committed relationship for more than 10 years, Trampf said.

“We have turned to each other for love, for support, for understanding and for care,” Trampf said. “Being gay doesn’t mean that you aren’t in love or that you aren’t wiling to make this type of commitment.”

Wangemann and Badger also said they experienced difficulty in medical situations when Wangemann was diagnosed with lung cancer and entered a coma following a surgery in 2011.

The couple had secured a power of attorney contract to allow Badger to make decisions regarding his partner’s health, Badger said. When Wangemann’s father was included in discussions, he argued for ending his son’s life support.

Although Badger succeeded in continuing Wangemann’s life support until he recovered, he said no one would have even questioned his involvement in his medical situation if they were legally married.

“I want to do my part to correct this injustice,” Wangemann said. “All I want is to have my love for my partner validated as we head into the twilight of our lives.”

ACLU is pursuing five other federal lawsuits in Ohio, Oregon, North Carolina, Pennsylvania and Virginia, as well as legal action in Utah to restore marriage benefits after a district court judge struck down the state’s same-sex marriage ban in December.

Knight said he expects the issue to end up in the U.S. Supreme Court very soon, with a total of 48 federal and state cases in 20 different states.

“We don’t put fundamental freedoms up to a vote of the majority,” Dupuis said.

According to the Associated Press, Wisconsin Family Action President Julaine Appling said her organization may join the lawsuit to defend the same-sex marriage ban.

Appling said the lawsuit is similar to the legal action ACLU has taken in other states.

“This organization will continue to defend, strength[en] and promote the institution of traditional marriage with every fiber we have,” she said. “If the rule of law is applied we prevail.”