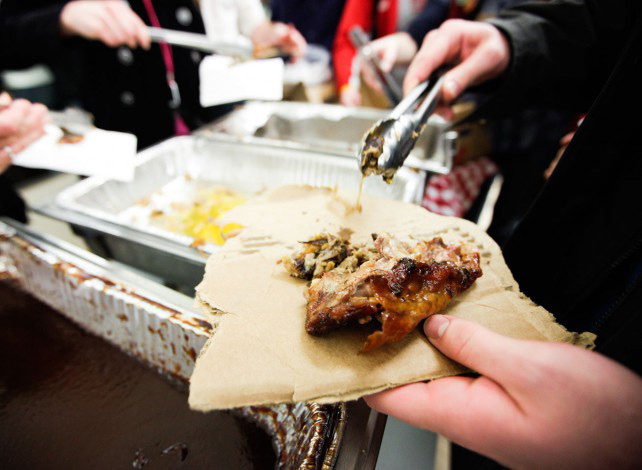 Dan Fox, a well-known chef at the new Madison restaurant Heritage Tavern, has been selling pork from his farm without a license, leaving consumers open to potential health and safety risks, according to reporting from the Wisconsin State Journal.

Fox, who opened his restaurant in September, raises heritage pork on his farm. Heritage pork is taken from pigs bred to have more fat and flavor, according to the website for SloPig, an event Fox has put on annually to educate people on the benefits of using meat from heritage animals.

Regarding the case, Jim Dick, Communications Director for the Wisconsin Department of Agriculture, Trade and Consumer Protection confirmed the case is open and Fox’s pork business is under investigation, but said he could not comment any further.

However, in a statement made to a Wisconsin State Journal reporter last week, Dick said there are no licenses on record for Fox’s farm, Fox Heritage Foods.

Regarding the licensing procedure, Dick said that it is difficult to define because each individual case is unique.

“Each individual case is different, so trying to give a general procedure may or may not fit this one,” Dick said. “So I don’t even want to try to go there and say ‘in general.’”

According to the Department of Agriculture, Trade and Consumer Protection’s website, licensing began as a method of maintaining sanitation in the place of production. The guidelines say it has more to do with the food operation than the possible contamination of the food itself.

“The risk for consumption turns on the sanitation and other safety precautions at the slaughterhouse,” Carstensen said. “The licensing and continued inspection process seeks to reduce those risks.”

Fox declined to comment on anything relating to licensing.

“We’re right in the middle of a few very exciting things,” Fox said. “But at this current time we’re not answering any questions in regards to [the licensing process].”

According to Fox’s bio on his SloPig site, he went to culinary school at Kendall College and worked at restaurants in Chicago, Austria and France before coming to Madison.

According to reporting from Madison Magazine, Fox sells his pigs to several Madison area restaurants, including Osteria Papavero, Brasserie V and a Pig in a Fur Coat, as well as establishments in Milwaukee and Chicago. Several of these customers were visited by DATCP agents, and some meat from Fox’s farm was confiscated.

In addition, according to reporting from the Wisconsin State Journal some of Fox’s clients visited by the department said they were told Fox’s meat was safe to eat, and expressed hopes to buy from him again once the process is completed.

“It’s nothing more than us trying to work through a few interpersonal things and trying to move forward in a very positive, holistic manner,” Fox told the Wisconsin State Journal. “Nothing negative has come from it.”