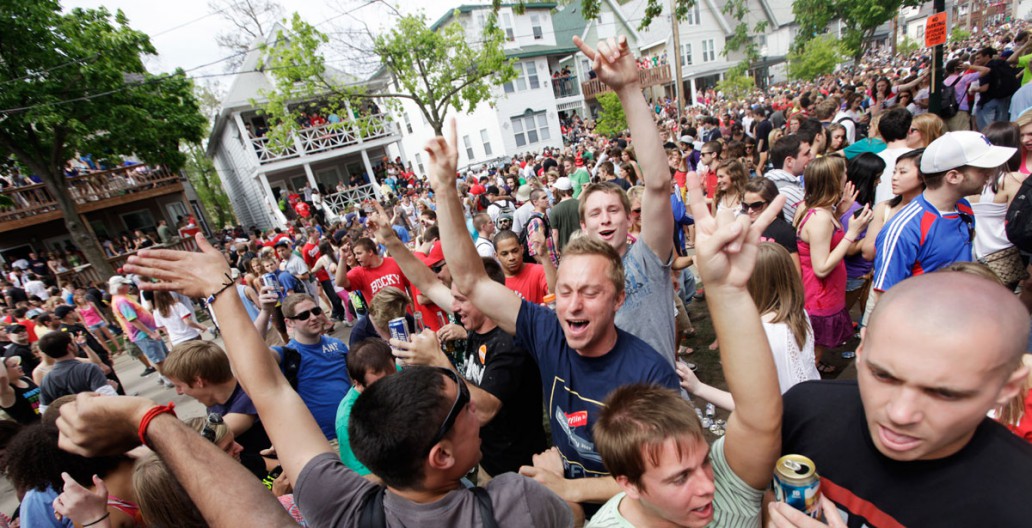 With the annual Mifflin Street Block Party approaching this weekend, representatives from the event’s sponsor, Majestic Live, teamed up with city officials from Madison’s police and fire departments to tell Mifflin residents Monday how to prepare for a fun and safe weekend.

In the annual neighborhood meeting, Ald. Mike Verveer, District 4, told residents the biggest change to their historic block party would allow attendees who are above the legal age to consume alcohol to carry open alcoholic beverages during the event.

Verveer said the privilege comes with rules, as patrons are to be issued wristbands when purchasing alcohol from the event’s banquet tables.

Having attended every Mifflin Street Block Party since his freshman year in college, Verveer said the party would remain true to its roots and avoid any hint of becoming a commercialized event.

“This will not be Freak Fest on State Street – there will not be a gated, ticketed admission,” Verveer said.

Verveer said having sponsors for the block party will allow police officers and public safety workers to have someone to work with to provide attendees with music, food and entertainment, rather than having an event based solely on drinking.

“We didn’t have any interest in sponsoring a block party without having our main focus be live music,” Leslie said. “We said if we’re going to do this, then we want to put live music back on the street and we want people to feel like they can watch music and not be concerned about getting a ticket for an open container.”

Capitol Neighborhoods member Scott Kolar said he did not expect the association’s executive council to allow the beer permit for the event but was proud to see strong support.

Kolar told residents the previous model for the block party had many issues going against it.

“Our goal is in the next three years, try to have this event evolve into something positive because frankly, it’s a liability now,” he said. “The city spends a lot of money providing support for police and fire and if we can get this going the way we want, it can become a real asset to the city.”

Also in attendance at the meeting were members of the city’s police and fire departments, who informed the residents on safety precautions and tips for this weekend.

Gloede, who will attend his 22nd block party this weekend, said he wants a safe weekend from partygoers so the event can be embraced by the community as a whole.

Attendees can have open beer from 11 a.m. until 7 p.m. at Mifflin, Gloede said, as long as it is not in a glass container.