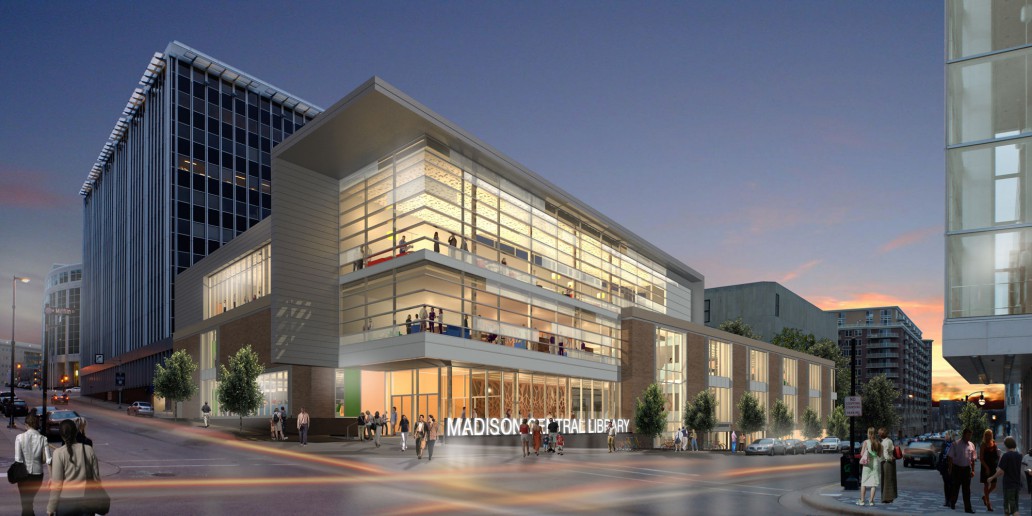 The newly revised plan for the Madison Central Library is in the final stages of completion as designers held the sixth and final public meeting Thursday to present their revisions.

Doug Hursh, director of design for Potter Lawson and Traci Lesneski, lead interior designer of the project, walked the audience through the interior and exterior specifics for the new library.

According to Hursh, the $29.5 million, three story construction offers Madison a modern library for the 21st century, including high ceilings, more natural light and vibrant colors.

Lesneski said 119,000 square feet are being added to the existing library, which would boast a significant increase in public space with more office space, desktop computers and a children’s area called “The Meadow.”

The Meadow will include computers and self-checkout stations for children.

The exterior of the library will experiment with color and green space as interchangeable LED lights will be installed in the building’s glass panels. An open roof will sustain grass and outdoor seating.

“The green roof is in the budget right now, but one of the alternates that we’ll have in the bidding documents is to do a full green roof,” Hursh said.

The alternate proposal would be designed as a terrace with seating arranged around the low-maintenance grass.

Hursh said the exterior of the Mifflin Street entry would have a luminous wall designed to reflect the activity on the sidewalk, which will be widened by two feet.

“The glowing wall that Doug described …will wrap into an interior wall and guide you right into the new entry,” Lesneski said.

The designers said the reason for using glass panels as opposed to brick was to make the activity inside the library visible and more connected to the outside.

“One of the things that the advocate groups do now is on Wednesdays, they use the large meeting room throughout the day for appointments, where people who are homeless can get help finding the services that they need,” Lesneski said.

The new plan would provide privacy and other amenities for groups wishing to continue the appointments, Lesneski said.

With the spring elections bringing in new leadership to Madison, the design team said there would be no delays from the city.

The team met with Mayor Dave Cieslewicz and Mayor-elect Paul Soglin to display the new plan, who left the discussion with mutual optimism for the project.

Hursh said the timeline for the library is set to be completed 18 months after breaking ground in November.