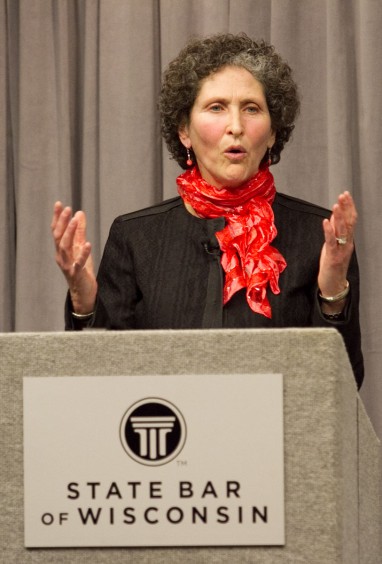 With the April 5 elections drawing near, the two candidates for Wisconsin Supreme Court justice faced one another on experience and the value of impartiality Monday in a debate held by the State Bar of Wisconsin.

Kloppenburg, with more than 20 years of experience in law and teaching at the University of Wisconsin law school since 1990, said it is imperative justices be independent and impartial, claiming Prosser has a partisan approach.

If elected, Kloppenburg said she would instill public confidence in the law system by applying the law to the facts without partisanship.

“People do not know how I will decide, they know how [Prosser] will decide – he has signaled as much,” Kloppenburg said. “I am committed to restoring peoples’ confidence in the court and have run a campaign to connect with thousands of people.”

Prosser, with 12 years of experience on the Wisconsin State Supreme Court, responded by saying he matched Kloppenburg’s outreach to constituents and students.

In response to Kloppenburg’s statement of his politically-minded decisions in court, Prosser said in a campaign as political as this, candidates are undermining the court with false claims.

“Throughout the entire campaign, I have been accused of partisanship and lack of impartiality and prejudging cases,” Prosser said. “But there isn’t any evidence of that.”

Prosser said members of his campaign have asked Kloppenburg’s spokesperson to name specific incidents of higher court cases in which Prosser demonstrated impartiality, and were not given any examples.

Based on the allegations against him, Prosser said the most substantial claim his opponent’s team has been able to mitigate only further demonstrates Prosser’s previous leadership on the bench.

“The best compliment I received is that I’m in the center of the court, that I’m an unpredictable vote and that people get a fair shake when I’m sitting on the court.” Prosser said.

When asked about the possibility of 2012 being the last year of public financing for candidates as outlined in Gov. Scott Walker’s proposed biennial budget, Prosser said there are uncertain rules in the Impartial Justice Act that need revision.

He said he began the campaign with $300,000, but a question of conductibility was called into play when Kloppenburg’s campaign allies spent nearly $20 million on literature and ads meant to discredit Prosser – an example Prosser said calls for change.

Kloppenburg said there is no evidence she is connected to third-party advertisement campaigns that attack Prosser’s experience as a referendum supporting Walker.

With her time spent in circuit court as both litigator and prosecutor, Kloppenburg said her record is highly developed and in full public view.

Kloppenburg said she would work to make law more accessible and transparent to the public and would not bring personal vendettas or political polarization to the courts.

“My job is to do complete and comprehensive research … and to write decisions that are well-grounded and well-reasoned and that are easy to understand so that everyone knows what the decisions say and what the law is,” Kloppenburg said.