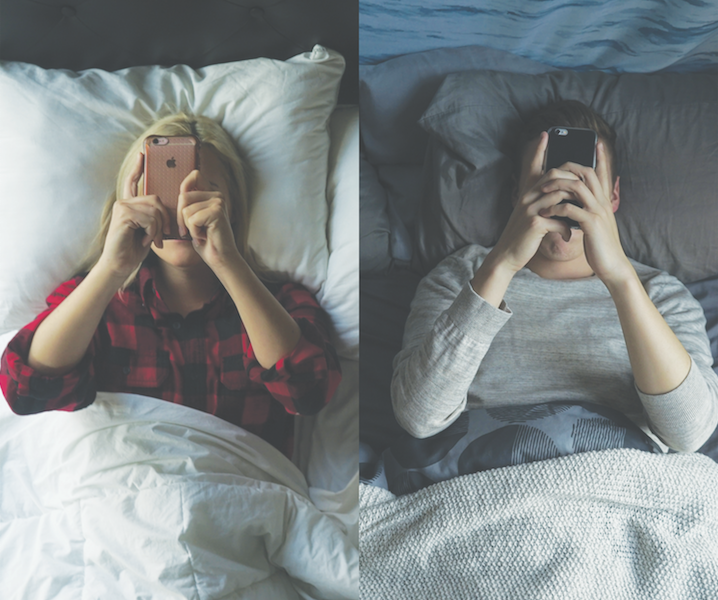 Prior to meeting her fiancé, University of Wisconsin senior Jenna Wroblewski had her fair share of failed Tinder matches.

Dating app users often find the platforms can function as either a means to solely hook up, or an opportunity to form a relationship.

Two summers ago, Wroblewski found her long-term relationship on Tinder in Norway and said, “rare is an understatement” to describe the successful match.

“My relationship, begrudgingly thanks to Tinder, is more than I could have ever anticipated,” Wroblewski said. “I’m so happy that things have turned out the way they have, based on Tinder’s reputation as a strictly hook-up app.”

While Wroblewski acknowledged the stigma attached to Tinder relationships, new UW research suggests she is not alone in her success.

Breaking down the pros and cons of popular dating appsValentine’s Day has come and gone, but not everyone had a lively, amorous weekend. If you had a lonesome holiday, The Read…

Catalina Toma, UW assistant professor of communication science, has studied and surveyed dating app users as a mass group. Through her forthcoming study, “There are plenty of fish in the sea: Effects of choice overload and reversibility on online daters’ satisfaction with selected partners,” Toma revealed approximately one third of recent long-term relationships emerged from online interactions.

Match Group, the parent company of OKCupid, Match.com and Tinder, had a 2015 revenue of more than $1 billion.

Thanks to college students

As a part of the most popular demographic using dating apps, college students both contribute to and benefit from the success of the online platforms, Toma said.

“It makes sense if you think about it,” Toma said. “Online dating is helpful for people who have a difficult time finding potential partners in everyday life. Perhaps you are really busy professionally, or you have moved into a new atmosphere, like college, and don’t know anyone.”

“My relationship, begrudgingly thanks to Tinder, is more than I could have ever anticipated. I’m so happy that things have turned out the way they have, based on Tinder’s reputation as a strictly hook-up app.”Jenna Wroblewski

Tinder, for example, has more than 50 million users worldwide. The app built its large user base through initially marketing to college students, reaching half a million users in six months.

The notion of dating apps as a means to solely hook up is one idea Toma, and users like Wroblewski, have turned on its head. In Toma’s study, she found that meeting a long-term partner via dating apps or websites is not all that uncommon. Toma said her study demonstrated that dating apps are one of the most common ways to meet a long-term partner, second only to meeting through friends.

Between 2005 and 2012, 35 percent of long-term relationships originated from an online meeting. Fifty percent of those relationships started through dating apps or websites, according to Toma’s study.

Relationship between technology and healthy dating

As the number of online outlets to meet potential partners grows, UW is also working to address a new set of problems they may pose to healthy relationship development.

Noveldt said UHS found it necessary to incorporate separate workshops for dating and the promotion of safe and consensual sex. Dubbed DatingWIse and SexWIse, the in-person workshops encourage students to reflect on their personal lives and what it means to engage in a healthy college relationship.

DatingWIse encourages college students to reflect on who they want to date and what they want to get out of a relationship, Noveldt said. It helps students assess their needs and how to disagree with a partner in a healthy manner, she said.

“It empowers students to really think through who they want to date,” Noveldt said. “Long term and short term, what are their deal breakers? Who are they as people and who do they want to date as people? It bolsters their ability to be validated, that they’re worthy of the respect, but also helps them explore who they are.”

While some students prefer to seek relationships in person, many are resorting to a slew of dating apps.

Toma and colleague Mina Choi published a study earlier this year, entitled “Mobile Media Matters”, which identifies whether dating apps can enable healthy relationship formation. The study showed that relying on technology to manage relationships was not only beneficial to couples pursuing long-distance relationships, but also to those who reside close to each other and have consistent, in-person contact.

Still, a negative psychological effect of dating apps is their presentation of an unlimited array of options, which causes people to frequently think there might be somebody better. This mentality could be detrimental to being happy with one’s partner, Toma said.

Toma’s “There are plenty of fish in the sea” study results showed that participants who were presented with six different options as opposed to 24 were more satisfied with their final choice.

Despite dating apps’ success in fostering long-term relationships, the platform has its share of drawbacks — particularly for women.

While using Tinder proved ultimately successful for Wroblewski, she took issue with how men had interacted with her. She averted hookups and went on a couple of dates, but, prior to meeting her fiance, her experience was “lackluster.”

“I quickly grew tired of sifting through a slew of bad pick-up lines and blatant sexism,” Wroblewski said. “I did once change my profile pictures to miscellaneous coffee cups and posed as a cup — and was incessantly objectified.”

Sexism and objectification of women have deterred many of them from dating app platforms, perhaps playing into the general misconception that they primarily serve as a place to find hookups, Wroblewski said.

Tinder has granted heterosexual users a fast and convenient means of connecting, but Tinder’s CEO Sean Rad has said they are working on a more positive user experience for members of the LGBTQ+ community. Other apps like Grindr are specifically tailored to gay, bisexual and queer men.

UW junior Jack Larson’s experiences with both Tinder and Grindr have been primarily negative, he said, criticizing the hook-up culture he witnessed, though he was successful in finding a few short-term relationships and friendships. Larson, however, said the availability of dating apps in general is a positive aspect, particularly for the LGBTQ+ community.

“They are good to have available,” Larson said. “Especially for the LGBTQ community, who may find it harder to meet people the more traditional way.”

Dating apps can lead to long-term, fulfilling relationships, but their format can perpetuate stereotypical thinking and other detrimental mindsets. This can be an issue in a relationship later on and lead to unrealistic and heightened expectations for a partner, Toma said.

She said dating apps like Tinder provide a limited amount of information, primarily focused on visual presentation through photographs and a brief biography. With the feature of swiping left or right, Tinder users make fast, split-second decisions based on immediate physical attraction.

“The hallmark of this idealization loop is that it makes online interactants experience greater social and/or romantic attraction toward their partners than they would have experienced had the interaction taken place face-to-face.”Catalina Toma

Not only does the app highlight physical attractiveness but social status, two important but superficial factors taken into consideration when deciding who to date, Toma said.

Giving users the option to list their occupation and school reflects an opportunity to showcase social status. This can be problematic, however, and lead to what Toma called “idealization,” in which one person mentally fills in the blanks with information fitting an existing stereotype. This can be precarious for dating, prompting imagined qualities of a prospective partner that may not be correct.

“The hallmark of this idealization loop is that it makes online interactants experience greater social and/or romantic attraction toward their partners than they would have experienced had the interaction taken place face-to-face,” Toma said.

Though dating apps aren’t for everyone, the numbers don’t lie.

Contrary to popular belief, 80 percent of Tinder users aren’t looking for a one night stand or a hookup, but rather for a relationship, Toma said.

Dating apps don’t necessarily lead people to behave one way or another. Instead, they simply facilitate dating and dating related “desires,” Toma said. For college students desiring a healthy relationship in particular, these dating apps could be the beginning of effective mobile communication.

“Interpersonal media has become an inextricable part of relational management,” Toma said in her study, “Mobile Media Matters.” “The use of these media is associated with meaningful psychological experiences.”