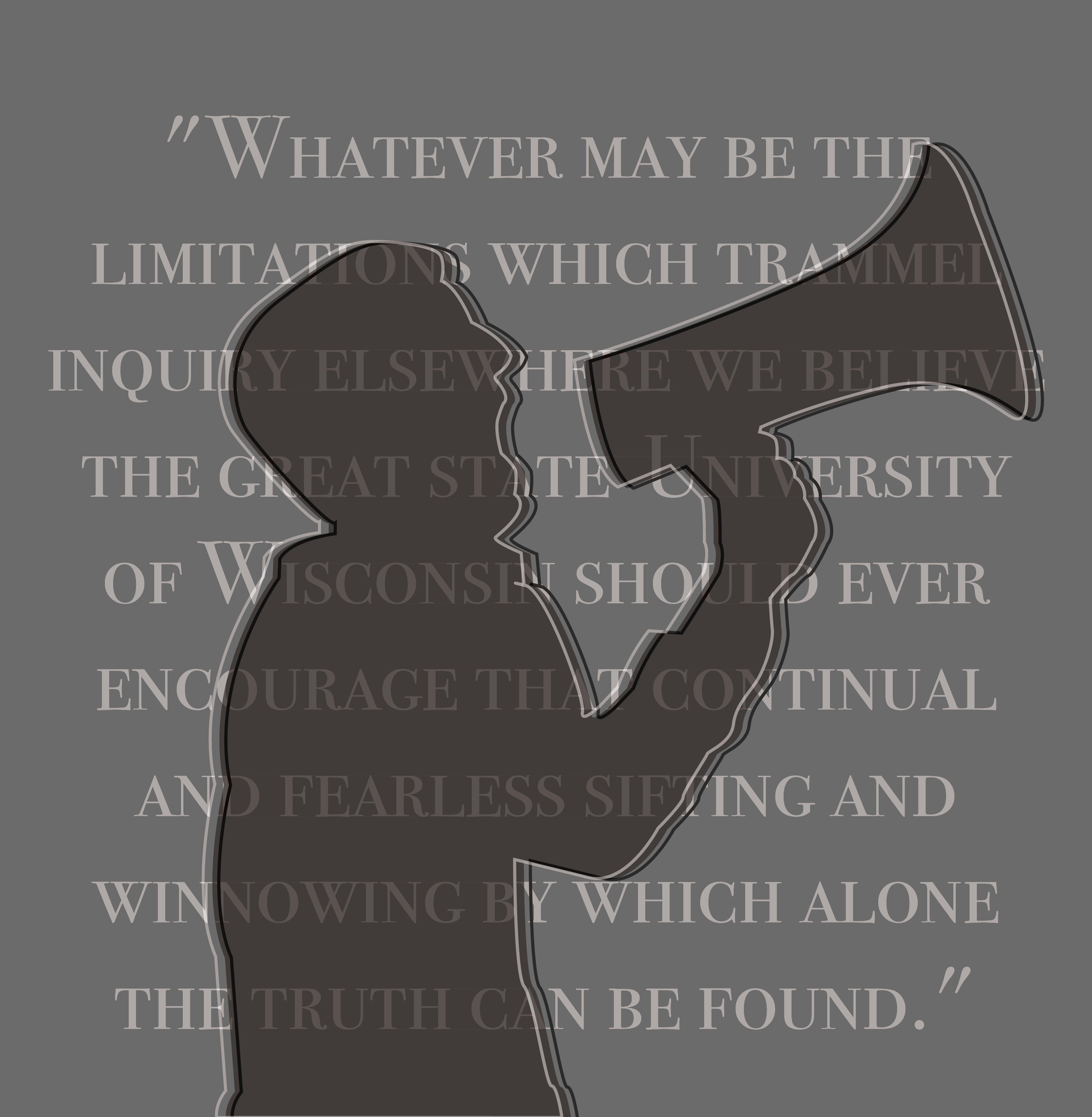 In 1894, University of Wisconsin economics professor Richard Ely came under fire for his controversial pro-labor stance at a time when academic freedom on American college campuses was all but guaranteed.

But the UW System Board of Regents chose to defend Ely and used his case as a springboard to set a precedent for academic freedom.

To honor the board’s commitment to academic freedom, the UW class of 1915 presented a plaque bearing the regents’ 1894 “sifting and winnowing” statement that has remained fixed upon Bascom Hall ever since.

Through the years, the regents have reaffirmed academic freedom, upholding it most recently in a December 2015 resolution. But at a time when concerns over diversity and inclusivity are at a peak across the nation, the resolution seems misguided for some who fear it might threaten progressive causes. 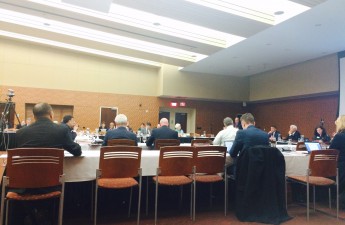 Several Board of Regents members and UW professors began forming the resolution in spring 2015 amid a national debate about free speech on college campuses. In one of the more contentious parts of their statement, they wrote, “it is not the proper role of the university to attempt to shield individuals from ideas and opinions they, or others, find unwelcome, disagreeable, or even deeply offensive.”

Retired UW political science professor Donald Downs, a free speech advocate who helped form the resolution, said the statement was modeled after a University of Chicago statement supporting free speech. Regent Rebecca Millner said December’s resolution was to reaffirm the Board of Regents’ stance they had held since the 1894 Ely case.

She said the resolution was intended to ensure that faculty, staff and students could consider all sides of a topic.

“It’s important that our students have the ability to express varying political beliefs within the context of the university because those framing of ideas are so important,” Millner said. “It’s important to both protecting the speaker and strengthening the listener.”

But the regents did not vote unanimously.

Regents Charles Pruitt and Jose Vasquez did not support the resolution. Pruitt explained his dissent in an email to The Badger Herald.

“I believe we would have been better served for this resolution to begin at the campus level and move through the shared governance groups there, rather than be initiated at the regent level and passed down to the campus,” Pruitt wrote.

Associated Students of Madison Chair Madison Laning reflected Pruitt’s concerns. She said the Regents didn’t release their agenda until just days before their meeting, which prevented students from being involved in deliberation.

“If we had been involved in more discussions, [the resolution] could have been changed to resemble the sifting and winnowing concept from the past, but there were many ambiguities around it and an overall feeling of distrust of the Regents,” Laning said.

Students who organized the Black Out March Nov. 12 in solidarity with University of Missouri students against systemic racism also staged a silent protest in response to the resolution at the Board of Regents’ December meeting.

Kenneth Cole, a senior who helped organize November’s Black Out March, was among the protesters at the Board of Regents meeting. For him, the free speech resolution, which the regents passed one month after the march, seemed to directly condone offensive speech that protesters allegedly heard during the march.

“In the [resolution], it’s OK for students to … say hate speech or discriminatory speech that might be offensive or not conducive to an open and inclusive learning environment for everybody,” Cole said.

Questions about what free speech means on campus are not new to UW. Since the Ely case, the regents have continued to uphold free speech rights for both students and faculty.

Now, students and faculty struggle to find a solution to promote a diverse and inclusive campus without suppressing free speech. UW Chancellor Rebecca Blank wrote an email to the campus community Nov. 13, which triggered criticism about Blank’s commitment to the marketplace of ideas on campus.

“No one is entitled to express [ideas] in ways that diminish others, or that devalues the presence of anyone that is part of our Badger community,” Blank wrote.

She commented on the post three days later that the message was “intended as an appeal for civility and respect in how we deal with each other as a community” and “not meant to imply a limitation on individual speech.”

Downs said while Blank’s original statement didn’t emphasize the importance and priority of free speech, he still has faith she’s committed to the issue.

The extent of free speech

Robert Drechsel, a UW media law professor, said the First Amendment limits only government restrictions on speech, not those found in the private sector.

“In a purely legal sense, there can be more freedom of speech on campuses of public institutions than on campuses of private schools,” Drechsel said in an email to The Badger Herald.

Academic freedom is the idea that faculty have certain rights to talk about issues that may be controversial as long as they remain within their subject’s boundaries, Sharpless said.

Freedom of expression, he said, allows students to express controversial beliefs in their coursework and on campus property without fear of punishment or expulsion. Many student concerns stem from whether hate or discriminatory speech should be punished, but Downs said the First Amendment already restricts peer-on-peer harassment, threats and libel, among others.

Offensive speech targeted at general groups is not illegal because people are allowed to express their beliefs, even if they are unpopular, W. Lee Hansen, former UW economics professor and author of “Academic Freedom on ‘Trial’: 100 Years of Sifting and Winnowing at the University of Wisconsin,” said.

“Some people may be harmed or feel hurt about what they hear,” Hansen said. “But it’s part of the price we pay for being in a democracy where people can speak freely and say what they want to say.”

Many believe, including Laning, that campuses should embrace free speech by preserving academic freedom and freedom of expression as long as hate speech is not tolerated.

“When you start attacking someone’s identity or something a person cannot change, there can be a line drawn,” Laning said.

But instead of policing offensive speech, Laning said administration and ASM should spearhead new campus programs that might lead to a more inclusive and tolerant campus.

She said incoming freshmen, many of whom come from racially homogeneous, rural areas, should be required to undergo a cultural competency program before arriving at orientation.

Cole agreed, adding that in the future, regents should include student concerns on their agenda — specifically, how to discipline discriminatory or hate speech on campus.

“That type of speech should be reprimanded, and we should have a stipulated set of rules on what that is,” Cole said. “If [the Board of Regents doesn’t] do that, we’re of course going to come up with our own guidelines of things that we think are just taking it way too far.”

Others, like UW professor Sara Goldrick-Rab, said the university ought to focus its efforts on training faculty to better facilitate uncomfortable conversations in classrooms.

“I definitely don’t think limits should be placed on free speech in the classroom,” Goldrick-Rab said. “When faculty don’t get enough support to learn how to educate diverse populations and to have hard conversations, they don’t know how. Then the student response is, ‘I don’t want certain things said.’”

But Tyriek Mack, a sophomore involved in several groups on campus, including Black Student Union, said when certain controversial topics arise in class discussions, professors should draw the line. He said professors should support free speech while also taking a stand to make sure students don’t feel uncomfortable.

But Sharpless said if a professor decides to side with a certain student in discussion, that negatively affects the rest of the discussion, scaring off students who might want to voice a controversial opinion.

“If I butt in and say, ‘That’s wrong,’ I’m now determining what’s right or wrong in the middle of a discussion,” Sharpless said. “What I hope for is that another student will have the strength to look at that student and say, ‘You’re wrong.’”

UW recently created a website for students to report serious incidents of hate speech and discrimination, Associate Dean of Students Kevin Helmkamp said. While Downs, Sharpless and Anderson wrote in their op-ed that the site is “Orwellian in nature,” Helmkamp and Multicultural Student Center Director Joshua Moon Johnson said the site exists not to police ideas, but rather, to prevent threatening behavior against protected identities.

Johnson said perpetrators are not punished, but instead are brought in for a conversation.

“When I meet people who say these [offensive] things, my goal is not to kick them out of school,” Johnson said. “We all have racist ideas, but if we don’t take the time to process why that is and how we can grow from that, then we’re never going to move forward.”

The 100-year-old “sifting and winnowing” plaque on Bascom Hall represents UW’s role as a national pioneer in supporting academic freedom. But since it was mounted in 1915, students, faculty and the government have all played a role in contesting UW’s commitment to that statement.

But the Board of Regents, Blank, students and faculty do feel similarly about one concept: civility.

“The values of sifting and winnowing are about making a case for an idea, and not just simply offending,” Helmkamp said.