Roughly 16 months after the release of “Star Wars: Episode VIII – The Last Jedi” — which garnered a mix of reactions — the teaser for the final installment in the sequel saga is here. Following the patented “Star Wars” formula, the teaser offers enough to satisfy fans, but little more.

The first peek into “Episode IX” shows Rey, our hero, on a desert planet that could be Jakku, Tatooine or neither. She is alone, clutching Anakin Skywalker’s lightsaber, her eyes set on the horizon. She focuses on an enemy we can’t yet see. Luke Skywalker — who died in the last film — narrates the scene. The origins of his voice are unknown.

“We’ve passed on all we know,” Skywalker says. “A thousand generations live in you now. But this is your fight.”

Spoiler Alert: ‘Game of Thrones’ returns with vengeance in final seasonHBO’s “Game of Thrones” made a triumphant return Monday which has fans impatiently waiting for next week’s installment. The first Read…

No one can be completely sure who he is talking to or what he means — in line with the typical “Star Wars” teaser obscurity — but one can assume he is addressing Rey, who is strong with the Force.

Rey turns her back to the rapidly approaching ship. What we can assume are the gloved hands of Kylo Ren, Supreme Leader of the First Order and enemy to the Resistance, steers a TIE fighter towards her. She leaps in perfect time with the ships arrival, bending into a graceful backflip over its roof, her blue lightsaber blade glistening in slow motion. The opening scene ends and the tone is set.

The rest of the teaser is a collection of short, disconnected scenes. A pair of hands soldering Kylo Ren’s fractured helmet together, General Leia Organa — played by the late Carrie Fisher — and Rey embracing and Kylo Ren attacking a Resistance fighter in a red, burning forest are among them.

Two scenes stand out among the rest. One shows the return of Lando Calrissian, a former smuggler, friend of Han Solo and owner of the Millennium Falcon. Calrissian pilots the Falcon with Chewbacca, who lost Han Solo as a co-pilot when he was killed in “Episode VII: The Force Awakens.” Billy Dee Williams has not played the role since “Episode VI: Return of the Jedi” was released in 1983. 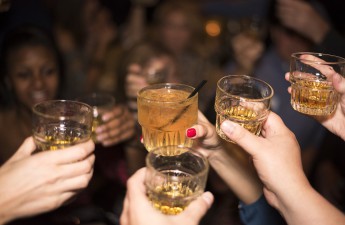 An economist’s guide to a thrifty Thirsty ThursdayIt’s Thirsty Thursday yet again in Madison (it seems like this happens every week). As cares about Friday’s classes fade Read…

The next significant scene shows Rey and others looking out over a tumultuous body of water.

“No one is ever really gone,” Luke Skywalker says.

It would be a comforting observation if it weren’t for what they were looking at when he said it — the shell of the fallen Death Star.

Cue Emperor Palpatine’s sinister and iconic laugh as the screen turns black. He was supposedly killed by Darth Vader, or Anakin Skywalker, in “Return of the Jedi,” but he seems to have returned. “No one is ever really gone,” indeed, as Skywalker said.

Last, but definitely not least, comes the official title of the last installment — “The Rise of Skywalker.” It’s provocative in the way “The Last Jedi” was and prompts many questions that have no hope of being answered until December of this year.

“Star Wars” has a few Skywalkers in the series, aside from Anakin, of course. They include —

“Star Wars” fans will undeniably spend the next eight months situating their nerves and their hopes when it comes to this film, and for good reason. “Episode IX: The Rise of Skywalker” is the last film to be made focusing on the Skywalker family, marking the final chapter in a 42-year-old story.

“This Christmas,” the teaser reads, “the saga comes to an end.”

Here’s to it being the end the saga deserves.