While working as a camp counselor in the mountains of Montana this summer, one of my colleagues, Kelsie, revealed one of her friend’s odd tendencies when meeting new people. Apparently, this friend believed that like cats, humans can also stare each other down until one outlasts the other to establish their superiority — so that’s exactly what she would do upon a first encounter.

We got a good laugh hearing about her frequent attempts to establish dominance among friends and strangers alike, imagining how many awkward encounters Kelsie’s friends must have endured, and if she’d actually secured any dominance in the process.

Though humans definitely don’t establish power dynamics in the same way cats might, our conversation often pops into my mind as I walk around campus and subconsciously lower my head when feeling out of place. My daily choice to cower my eyes in obedience seems to occur most when I pass men, especially those with an air of cocky confidence.

Hump day: Eliminating stigma of our emotionsI was going to do a piece on non-sexual acts to perform while in bed. It was going to be Read…

I must also acknowledge my bias in these tendencies, as I was raped multiple times by men who fit this profile, yet logically am aware that our campus is not only home to rapists, but also full of good men with outstanding character and respect for women.

While I work to merge my sense of logic and emotional reality, I am often afraid that by looking up at these men, I will somehow be subjected to their judgment — exposing myself as a sexual being rather than a human. The stakes, of staring back, are too high as I struggle to hold on to the limited sense of safety I have left.

All of that changed this Monday as I was forced to walk past one of the men who raped me.

Approaching Grainger Hall, foot traffic slowly thinned, clearing the way for the man with a white hat approaching in the distance. I am on constant alert for this hat because I know that it’s his. This common winter apparel always puts me on alert, acting as a symbol of imminent and terrifying danger.

My stomach lurched as I realized the inevitability of our passing, quickly finding myself without any alternative routes as I prepared for my greatest fear to come true — seeing him in the flesh.

I’ve spent hours thinking about what I would do if I saw him again, what he would do or what he may say. Much of my semester has been devoted to adjusting every route to class or work, in an effort to avoid him at all costs. Yet there he was, ten yards away and staying on course. 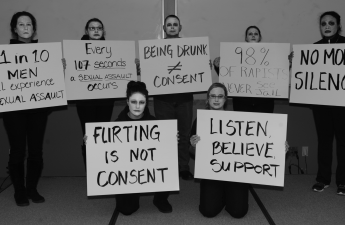 The closer he approached, the calmer I became, somehow remembering the conversation I’d had with my colleague Kelsie, and thinking about the message of strength I desperately needed to show.

He kept walking, eventually looking up to see me walking the other direction. He stared at me, and I stared back, keeping strong and cold eye contact — determined to win my dominance over him and gain back the safety I so rarely feel knowing he’s on campus too.

As I glared into his eyes, my strength and defiance grew. I knew I was in control, and he quickly looked down to his feet to avoid the reality of the actions he’d never literally had to face.

Though my encounter with him is specific in its context, the lesson I learned can still apply to all of us who are sometimes too afraid to look up. Our passing allowed me to better understand why I so often dropped my gaze — proving there can be benefits to disregarding these fearful instincts.

Hump Day: How to communicate better in relationshipsRelationships are hard. From showing each other appreciation to figuring out who’s paying for meals — having a strong, healthy Read…

While everyone deals with different forms of fear, it is our right to look up and establish our worth simply by walking with a sense of purpose.

Each and every human is just as valued as the next, even him. By challenging the voice in my head — the one that said he was more powerful as well as an unsurpassable feat — I established my worth not for him, but for me, and began to overcome that impossible wall.

Staring people down may not earn you dominance, or many new friendships for that matter, but keeping your head held high and trusting that you are worthy can earn you a sense of comfort in reaffirming who you are.

The fight for self-affirmation begins with small steps and battling against the urge to cower under pressures of awkwardness or fear. Choosing to look up can be an impactful way to start your battle.