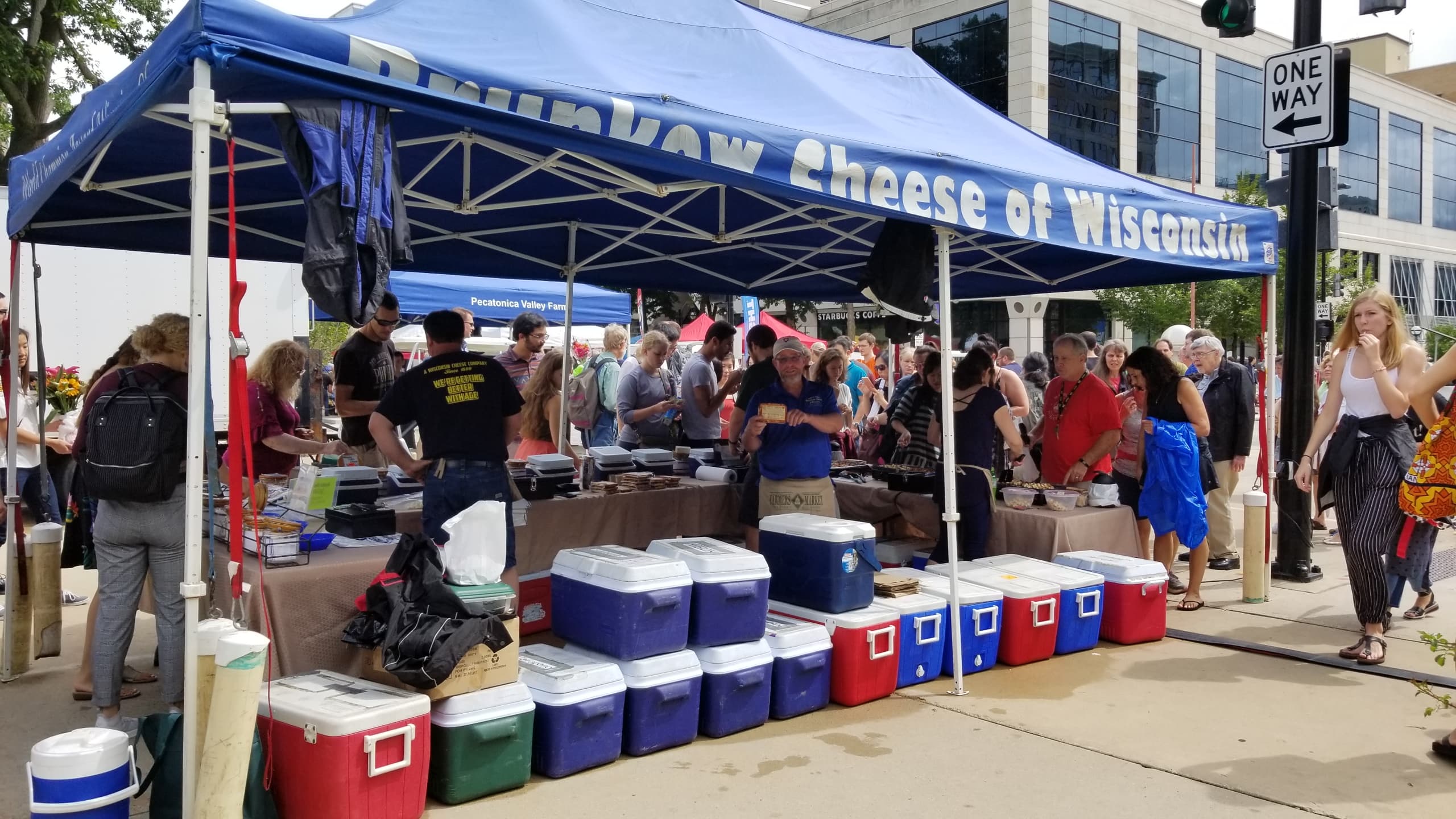 Since 1972, the Dane County Farmers Market has gifted the Madison community with a rich tradition of quality, fresh and locally grown goods with vendors dedicated to educating their customers. On a particularly rainy Saturday, I decided to get a taste of what a day in the life of a vendor was like.

Walking up towards the capital, there was a noticeable hustle and bustle around a large white tent valiantly displaying four flags with a familiar red and white graphic. As I walked closer, the smell of freshly baked goods rung clear in my mind that this was Stella’s Bakery.

Brian Winzenried, baker and owner of Stella’s Bakery, told me about his experiences being a part of the bakery business for the past 20 years of his life. 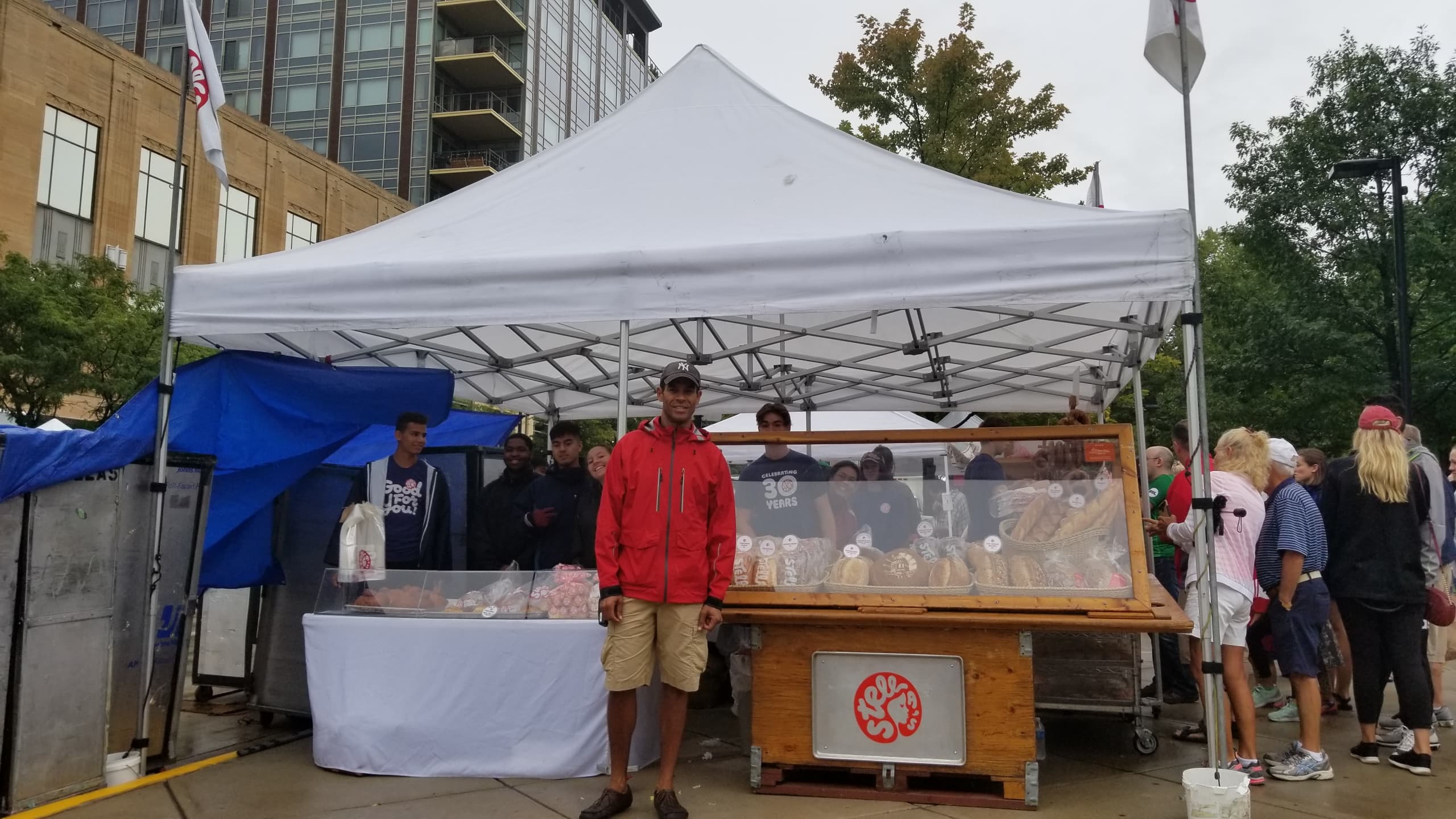 The bakery was originally founded in 1988 by a truck farmers in the Oshkosh area. At that time, they had experienced a major drought and had little harvest to present at the market, thus they decided to present some baked goods with the little grain they had and were able to sustain themselves.

“They accidentally invented cheese bread one night and it sort of became this cult following of the product,” Winzenried said.

Now their best selling product, 2500 to 2800 loafs of the iconic cheese bread sells itself every Saturday. 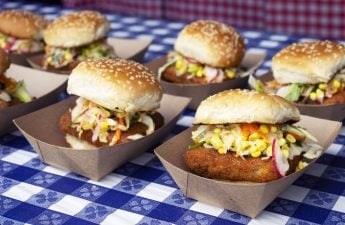 Fifth annual Yum Yum Fest remains worthy of titleWith all the babies running around barefoot on the turf, picnic blankets set up in front of the live band Read…

The prime positioning of Stella’s stand, in the front of the entrance to the market, plays a role in the popularity of the bakery. Winzenried explained how vendors are positioned throughout the market.

“The vendors here work on seniority,” Winzenried said. “So because we’ve been coming since 1988, we are what is called ‘permanent vendors,’ and they then they have what is called ‘daily vendors.'”

Having a spot guaranteed at the market is sought after, and the system of seniority prevents contention for spots when the market opens. 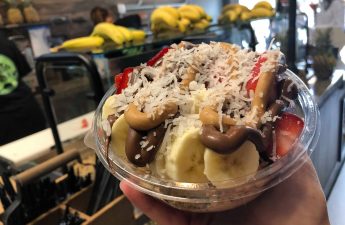 At Frutta Bowls, State Street becomes home to growing acai bowl trendAs a Los Angeles native, I am surrounded by thousands of acai bowl places around my hometown. The acai trend Read…

The vendors themselves collaborate often, from watching each others’ stands when one needs to go to the bathroom to buying goods from each other. All the vendors share one common goal.

“You get to see who grew the carrots or who harvested these crops, and then it’s our job as vendors to help people understand the skill involved in making your product,” Winzenried said. 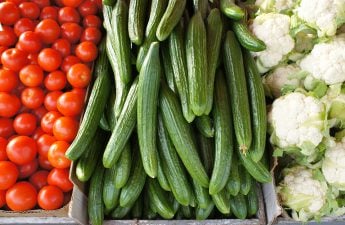 Continuing around the market, I stopped in front of a peculiar stand made of wood and tarp boasting a handsome assembly of herbs.

Tom Brantmeier has been vending from his stand made of recycled materials at the market for about 25 years. During his time as a vegetable and herb vendor, what has irked him the most is the competition for goods in demand.

“I used to be one of the only people that had garlic. Now everybody’s got it,” Brantmeier said. “I used to sell seven, five-gallon buckets of it every single day. Now I sell half.”

As I departed, Tom recommended that visitors acknowledge that, although the price of goods may be higher than grocery stores in the area, the quality is incomparable.

Though his time as a vendor has been tough, he has always remained dedicated to his goal of introducing new and healthy things for people to eat. He allowed me to sample the stem of some purslane — a succulent plant full of nutritional value that had a tart and refreshing kick to it.

“It’s been kind of fun introducing people to that,” Brantmeier said as my face slightly puckered. 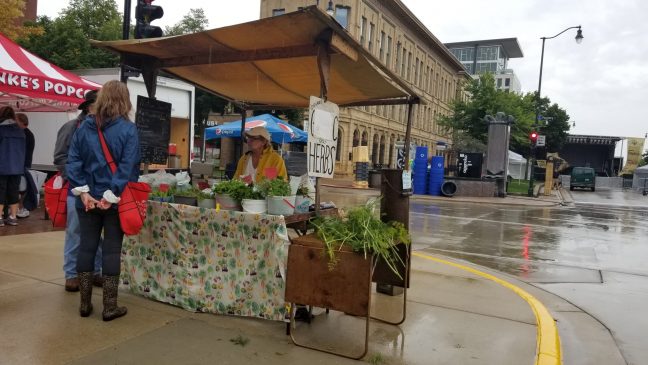 Garlic and herbs are always an option at the corner of the Dane County Farmers Market.
Tenzin Woser/The Badger Herald

Meandering around the market, again my nose was enveloped in a delicious scent. This time, the aroma of baked cheese curds on skillets was the culprit of my sudden appetite.

After sampling a few of the most aromatic curd bits on the sizzling iron pans, I spoke with co-owner of Brunkow Cheese, Karl Geissbuhler.

Brunkow Cheese has been a vendor at the farmers’ market for 21 years but the business has been running for 100 years. Geissbuhler himself is a fourth-generation cheesemaker. The company first came onto the Madison scene by a suggestion from Geissbuhler’s sister. A combination of vending their cold-spread cheese and cheese curds first propelled their business to the hallmark status they have today.

What makes Brunkow Cheese unique is the quality of the milk they take in, the key to the specialty flavors they provide. Their most popular baked cheese flavor is garlic, while the beer flavor and Monterey Jack with chicken soup flavoring counterparts have not gone over so well.

Either way, Geissbuhler has a deep appreciation for the role that the farmer’s market has played in expanding his business.

“The feedback from the customers is almost always positive,” Geissbuhler said. “We can try different things and get it right to the public and they either like it or they don’t like it.”

This instant feedback has become invaluable for Geissbuhler and his management of the company in the past few decades.

Addressing new students and patrons alike, Geissbuhler recommends that people come into the market with an open mind. Although the variety can be overwhelming, the quality is unlike any other.

“Don’t be afraid to try new things and you might be surprised with what you find and what you like,” Geissbuhler said. 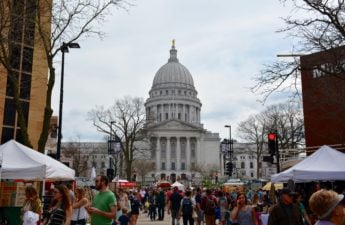 Finally, one cannot have the full Dane County Farmers’ Market experience without lending a passing, awe-inspired glance at The Gourd Guy’s table. The wooden table littered top to bottom with bold and beautiful gourds is run by the legendary Larry Haas.

Haas has been working as a vendor for more than 24 years and enjoys being involved with a place where he can sell what he truly loves.

“Ukuleles, thumb pianos, stuff like that, they do nice work, that’s the good part, that’s the love part,” Haas said. “You grow something, you sell it. They enjoy it, make something out of it and it lasts generations, so when I go up to the high god up there — whatever you may want to call it — the gourd will still be going down here.”

Haas is hopeful that people will start to replace popular plastic holders in their homes with gourds. He said society is becoming more environmentally conscious, and caring about the Earth.

Haas’ wife has recently begun a gourd festival in the Madison area. People come with gourds of all varieties to promote the utility and beauty of the fruit.

But it isn’t all fun and gourds.

“You’re not gonna get rich on this,” Haas said. “You have to have a love.”

Most years Haas will throw away half, if not more of his yield due to rotting. An immense amount of time and energy goes into cleaning and curing each of the gourds that last. Haas does it all himself by hand, even the thousands of miniature gourds.

Haas himself grown worried about his ability to carry on the business. Even a customer in the background couldn’t fathom the possibility, muttering they wouldn’t know what to do without a gourd. 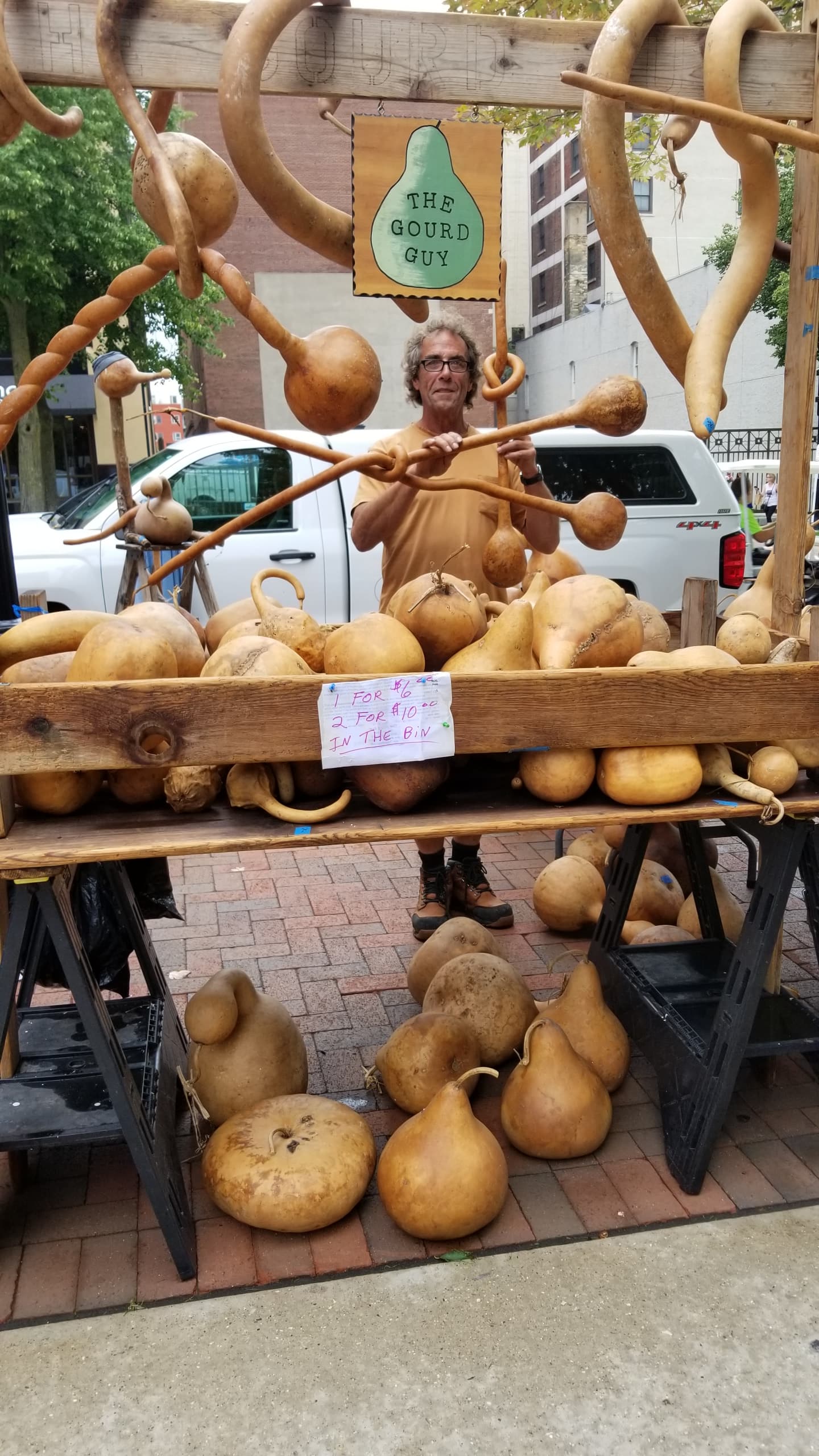 “I’m crowding the 60-mark and I’m starting to feel it. You naturally just kind of know you can only do so much,” Haas said. “The gourd pile looks pretty big sometimes when you gotta start cleaning them.”

The joy of being a part of the market and all of the innocuous moments for the connection it provides drives Haas to continue the mission of the gourd.

While parting, Haas left me with a miniature gourd and final thoughts.

“Nobody wants nothing but fun, keeping it clean and happy,” Haas said. “We’re all having a ball.”