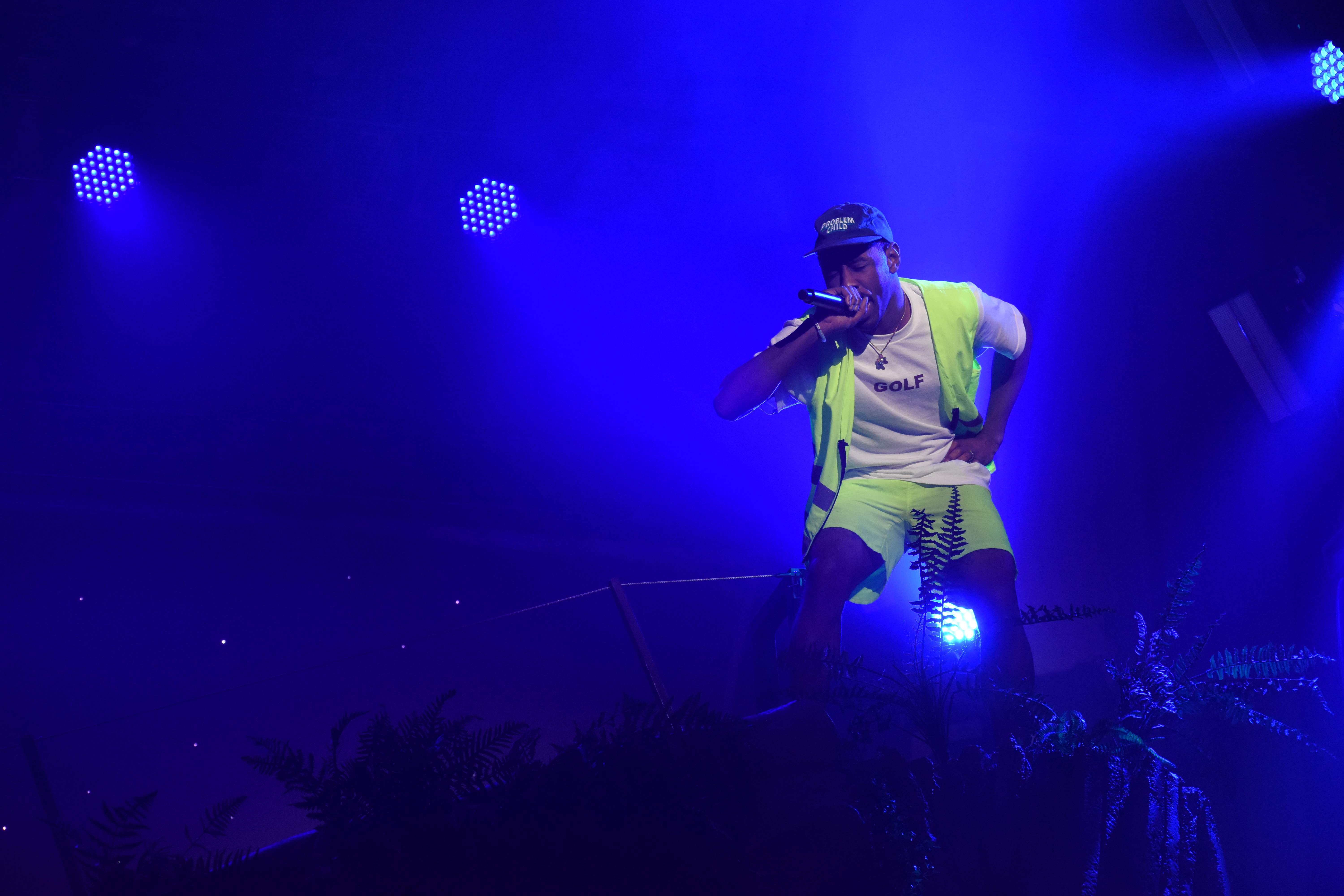 Despite the immense sweat in our eyes, The Badger Herald accepted the pain to see everyone’s favorite flower boy, Tyler, The Creator at the Alliant Energy Center last Thursday, March 1.

Was Vince’s performance disappointing or under appreciated?

JILL: Vince really wasn’t that great of an opener.  The countdown before he went on stage heightened anxiety and anticipations only for audience members to be let down. The only memorable song he performed was ‘Big Fish,’ but only because the chorus sang by Juicy J got everyone dancing. Vince does have a unique voice. But, listening to his more brazen word pronunciation live was a bit painful on the ears at times. My friends kept saying, “We want Tyler!” and I completely agreed.

CELESTE: I am a fan of Vince Staples and his music, but I found myself saying the words “I’m bored” to my friends.

HENRY: People will say he was morose or boring, but the cold austerity that underlines so much of Vince’s music is what makes him such an important artist to begin with. Context is also important. Compare his coldly technical stage setup, as well as his overall demeanor, to that of Tyler’s. You can’t have the pain without the pleasure, nor the joy sans the existential and physical dread that Vince’s music forces listeners to stomach. Though hype is not a word I would use to describe his performance, it was exactly what it needed to be in the mechanism of the concert as a whole.

BEN: Alright, Black History Month hasn’t been over for a week and white people are back to talking nonsense. Vince seemed like he was there to secure the bag and get out. Staples hasn’t been one to make friends throughout his rap career. His aim isn’t to satisfy the masses, but to speak his truth and sell records to provide for his family. Vince was the opener, we didn’t pay to see him. We paid at least $40 to see a Dennis Rodman imitation haircut go wild about his loneliness and boredom. Drink a Sprite.

How much of an impact does Tyler’s stage presence have on the concert?

HENRY: Immeasurable. The persona/personality Tyler has unfurled around Flower Boy has redefined how listeners, and by extension audience members, have viewed him. Gone are the devil may care, angsty shock-value days. Enter the sensitive, introspective and at time overwhelmed Tyler the Creator, a renewed person but one who is still tethered to his old self but not shackled. For me, his stage presence and his entire stage, taking the form of a biosphere of sorts, are all an extension of this new phase of his artistic life, and perhaps his personal one as well.

BEN: Stage presence is everything, especially when you’re the only one that the audience can see. The fans fed off Tyler climbing up stage props, creating a cycle representing the atmosphere of the concert. If the artist doesn’t at the very least appear passionate and excited to be on stage, then the fans might regret having paid for parking.

JILL: Tyler is such an incredible and creative individual. He is unapologetic. Tyler isn’t an act. Tyler isn’t a brand. Tyler is just himself. He says what’s on his mind and doesn’t sugar coat anything. He genuinely did not understand why people resided in Wisconsin or what we did out here in the Midwest. He said something to the effect of “You’re fucking weird out here, man.” He spoke as a black man looking into a sea of white people and even joked about how white people didn’t know what lotion was. A pretty valid observation. His stage presence is what set his performance apart from all others. It was more than just some singing and rapping — it was an experience.

CELESTE: His stage presence is what makes him such an interesting and important artist. He is as real on stage as he would be in his normal day-to-day life, and that’s what makes him so likeable. There was thought put into the physical stage itself — it was like a nightscape of trees and stars. He wore a reflective vest that made him glow against the backdrop. That’s a sign that even as a soloist, he lights up that stage like no other.

What songs made the concert worth the price of admission?

HENRY: I’d say the three sequenced songs that compose a holy trinity of sorts on Flower Boy, “See You Again,” “Who Dat Boy” and “Pothole.” He didn’t play them in that order at the concert, but for me these songs evoked the most personal reflection of my own life, a sense of sonder with the crowd as well as connection with Tyler himself.

BEN: What made the concert for me, was the remix done to Jay-Z’s “4:44” record, retitled “Ziploc” at the beginning of Tyler’s set. I couldn’t believe my ears, to hear one of the greatest instrumentals ever recorded receiving a remix by Tyler in front of a live audience, in Madison of all places.

JILL: I have to say that my favorite songs off of Flower Boy that he performed were ‘911/ Mr. Lonely’, ‘See you Again’, and ‘Boredom’. Even without the addition of other artists that have collaborated on those tracks such as Kali Uchis or Steve Lacy in attendance, Tyler was still able to hold his own on those tracks. A sweet surprise to his performance was the addition of his older jam ‘She’ which features Frank Ocean.

CELESTE: I’m a fan of the old school Tyler. “Yonkers,” “FUCKING YOUNG / PERFECT,” and “Tamale” were soooooo good. “See You Again,” “Who Dat Boy” and “Boredom” from Flower Boy were also great.