For those of you who were concerned whether my band of friends and I would actually make it through spring break and back, I’m here to report there were no unruly encounters, no injuries and no stragglers. Though I wish I could have spring breaked forever, I recognize that school, and eventually graduating, are probably more important than mindlessly wandering around the French Quarter for 40 years.

If you’ve never visited New Orleans, you have to before you die. Whether you’re 15 or 50 years old, you will find something to do, someone interesting to talk to and food that is sure to delight.

My band of hooligans fit right in. We traversed Bourbon Street in all its (trashy) glory, caught a few late night jazz shows on Frenchman Street, toured the Garden District, watched the Pelicans beat the Grizzlies at Smoothie King Center and even went back to school (kind of) by integrating with the “locals” near Tulane University and Loyola University. The whole back to school thing may have resulted in me dancing on a bar at 3 a.m., but that’s most definitely outside the scope of this column. 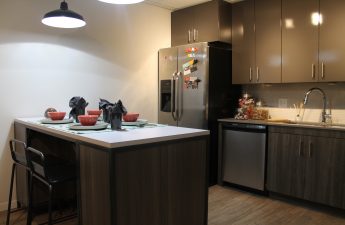 Cooking Sucks: No-brainer kebabs that will make your mouth waterThis week is the week — the start of spring break. Just as a forewarning, I will unfortunately not be Read…

What’s not outside of the scope of this column is all the food we ate while experiencing New Orleans. Before I list all the incredible food we ate, allow me to give you some historical reference for Louisiana cuisine. Just a forewarning, history is not my forte, so bear with me.

Louisiana cuisine is influenced by both Creole and Cajun cooking styles. Though these both start with C, they really are different. Creole cuisine is mostly associated with early 18th century French colonists and the dishes they created as an adaptation to the steamy southern climate. It is typically more formal and complex than Cajun cuisine and derives additional influence from Spain, Germany, Italy and England.

Nowadays, both styles contribute to Louisiana cuisine, but some restaurants still provide for diehard enthusiasts of either Creole or Cajun cooking styles. In addition to the flavors Creole and Cajun cuisine offer, Louisiana’s proximity to the gulf gives people the opportunity to eat extraordinarily fresh seafood, which people often eat as is or with minimal seasoning. My friends and I definitely took advantage of this while visiting.

Most of these dishes require specialty ingredients (unless you live close to a bayou) or hours to make. True to this column, I’ll give you a recipe that is both relatively easy and won’t require applying for a loan to make. 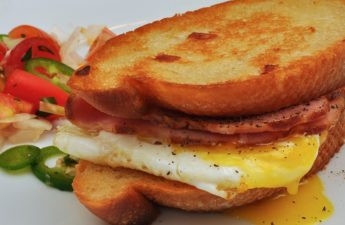 Cooking Sucks: The ‘Wreck’ breakfast sandwich is a hearty way to start your dayIt is that time of the semester — week eight. The few weeks leading up to spring break always seem Read…

This is a pasta dish with a Cajun flare. The dish utilizes shrimp as the protein of choice, but you can substitute chicken or other veggies as you please. Béchamel sauce is a roux-based white sauce (more to come) made with milk. It has a delicately smooth texture, if made properly, and serves as a great base for additional flavor — though true culinary enthusiasts would call blasphemy if they knew it was being adulterated by other.

1 pound raw shrimp, cleaned (can be found in Asian markets for cheap)

Salt and pepper to taste

Mix all the ingredients in the Cajun seasoning to create a Cajun spice mix.

Begin by preheating your medium sauce pan on medium-high heat. Season your cleaned shrimp with 2 teaspoons of prepared Cajun seasoning. Once your pan is preheated, add 1 tablespoon of butter.

Sauté the shrimp in the pan for about 90 seconds or less on each side until they start to slightly brown. You do not want to overcook the shrimp, so be sure to keep a close eye on them. Once they start to brown, put the shrimp in a bowl and cover with plastic wrap or a plate to finish cooking them. The covered bowl traps the steam in, finishing the cooking process. 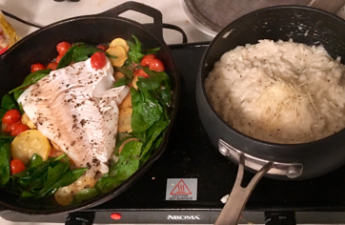 Cooking Sucks: Steamed fish, veggies and risotto has never felt so easyRecently, I’ve often found myself surprised by the fact the most edible thing I have in my fridge is olives. Read…

After you unload the shrimp from your medium pan, wipe out any residue left behind from cooking them, and place the pan back on the stove. Preheat the pan on medium-low heat.

While your pan is preheating, start boiling water for the pasta. Make sure to add salt to the water. Add the remaining 3 tablespoons of butter to your preheated sauce pan, and sauté the diced onions and peppers until the onions turn translucent. It’ll take about 2 to 3 minutes. At this point, add the minced garlic and sauté for an additional minute.

Now, the roux (flour and fat thickener) and subsequent Béchamel sauce comes together. In the pan with the sautéed vegetables, whisk in the flour until it is completely absorbed by the butter and veggies. Make sure the flour does not brown because this will cause your white sauce to turn brown. It can be prevented by turning the heat to low.

After the flour is absorbed, slowly add in the milk, continually stirring. The sauce should start to thicken and develop a smooth texture. If it is too thick, add more milk. To prevent clumping, add the milk in fractions until all the milk is used. After the sauce has developed, add the wine and remaining 2 teaspoons of Cajun seasoning.

At this point, the water should be done boiling. Cook until it is al dente (slightly chewy), allowing the sauce to simmer while cooking. To finish the sauce, add in the lemon juice (add more if you like a more tangy sauce), and salt and pepper to taste. Once the noodles are done cooking, add them to the pan with the shrimp, and allow everything to meld for a few minutes. Serve on nice plates and garnish with the parmesan cheese and chives. Pair with the remaining white wine.

As always, let me know if you have any questions, comments or suggestions at [email protected].

That is all for now,
Chef Sogs