Madison’s first documented “Thanksgiving” dinner was in 1838, several decades before President Abraham Lincoln would declare it a national holiday during the Civil War. In full Wisconsin fashion, it took place in the log cabin of Eben and Roseline Peck. Their humble abode served as a boarding house for workers building the first Capitol, and it was thought a Thanksgiving feast would be an appropriate celebration to bring everyone together.

Of course, many were unfamiliar with the tradition, and Wisconsin at the time apparently lacked one crucial ingredient: pumpkin. That’s right, even early 19th century Sconnies were craving that sensationalized fall gourd.

Before your Thanksgiving feast, retroactively help out the Pecks by enjoying a pumpkin-spiced brew. If you are seeking a strong, jumped-in-a-pile-of-leaves flavor, go for Dogfish Head’s Punkin Ale. With the warmest auburn coloring and complex palate, this ale will be a course prior to the many other fixings.

Washing down the stuffing

Some Thanksgiving staples are forever, but every family has its select outliers. In 1944, the USS Wisconsin was no exception, serving a full meal with everything from “sweet mixed pickles,” “Thousand Island dressing” and “cigarettes and cigars.”

If presented with a mystery meat smothered in Thousand Island dressing, it’s good to have a dependable beverage near. In a diversion from the usual course of this column, wine is encouraged to wash down suspect sides. While three-buck Chuck is always recommended, Cherry Blossom Pinot Noir (also available at Trader Joe’s) is a dollar extra with noticeably more body. If dabbling in double-digits, Menage a Tois is a great choice — just keep the label from grandma. 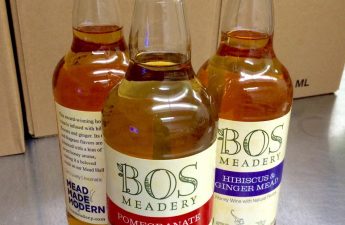 What’s on tap: Mead from the field to the glassSeveral weeks ago, flush-faced Madisonians gathered in an East Washington Avenue tasting room to admire the work of 13 female Read…

In 1835, Mary Spielman Roller moved from Buffalo, New York to the south side of Milwaukee with livestock and the ever-elusive turkey. While Roller’s recollection cannot transcend the racist caricatures of the Native Americans living near her at the time of settling in the Badger State, her story appropriately traces Benjamin Franklin’s favorite bird to the Dairyland.

Since turkey is the quintessential Thanksgiving protein, it deserves an equally palpable brew to accompany it. One Barrel Brewing’s Banjo Cat will not only wash down a (probably dry) bird, but with its stormy color and rich flavor will make any drinker prepared for the cold months Thanksgiving ushers in.

Everyone knows Thanksgiving doesn’t end once the feast has been consumed and everyone has fallen asleep. Eventually, the politically-incorrect uncle and socially-awkward cousin must rise and another round will be necessary.

Indeed, Thanksgiving has not always been designed by the food but instead by the celebration. In 1971, Madisonians held an alternative holiday party on Langdon: “The Gay Dance.” Under the mantra of “homosexuality is as American as apple pie,” partygoers were encouraged to donate for the National Gay Convention and generally revel in pride.

While there are many cocktails to choose from after “the nap,” one stands out: Milk Punch. Essentially eggnog without the egg, this New Orleans staple combines all the familiar, wintery spices into a highly sippable concoction.

The New York Times provides a solid recipe with bourbon, though brandy will certainly suffice for those loyal Wisconsin drinkers:

In a mixing glass three-quarters filled with ice, pour the bourbon, rum, milk or cream, vanilla and simple syrup. Shake vigorously for about 30 seconds or until chilled. Strain into a rocks glass. Dust with nutmeg.

Like eggnog, Milk Punch is intended for commiseration and camaraderie with loved ones. It’s essential for finally breaking out the Beach Boys Christmas album and being conscripted into a family game of Scrabble while the Badgers crush the Gophers.