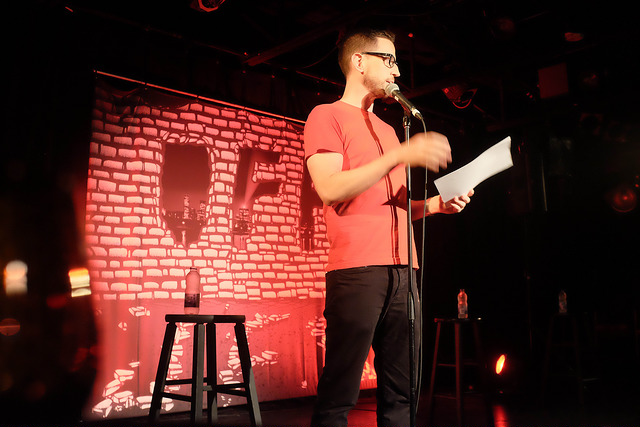 You may not think you know of Neal Brennan until you’ve seen his work, which you almost certainly have.

Brennan was the co-creator of “Chappelle’s Show,” the brains of the Amy Schumer and Seth Rogen Bud Light commercials and a writer on “All That” plus “The Daily Show.”But Brennan’s career has not been limited to just one comedic medium. He has written, produced, directed and acted in his career that began in the early ’90s.

His work, some of the most recognizable material of his generation, has presented itself in the form of television scripts and stand-up sets.  Now, his one-man show, ‘”3 Mics,” is coming to the Majestic Thursday after a successful run in Los Angeles and off-Broadway in New York City. The Badger Herald discussed comedy and its permeation into various parts of life with Brennan before he takes the stage.

This interview has been edited for style and clarity.

Neal Brennan: People say “sarcastic.” I see myself as talking back to the world. That would be my description. People would say “sardonic” or ‘”snarky.” That’s not really a question I ask myself. You tell me.

BH: You and Dave Chappelle go pretty far back. How has that relationship and its creative products helped shape your career in comedy?

BH: How does your perspective contribute to your work?

NB: I’m kind of a misfit. Things don’t really make sense to me, like marriage, so I’m not married. I perceive the things that make sense to me, like sketch comedy, stand-up comedy. I’m a ball-buster about pursuing what I believe in. There are things that I say where it’s like ‘that’s a bold claim’ and I can stand there and take it while people flinch. I’m a pain in the ass, so I don’t mind being one with other people in comedy.

BH: The flyer for “3 Mics” reads that it’s “One-liners, emotional stuff, and stand-up.” Tell me a bit about each of these and how they ultimately structure your show.

NB: Basically I come out and I don’t announce what anything is. I go to one mic and do three one-liners. Then I go to the far right and do 12 minutes of stand-up. Then the lights dim and I talk about my depression and things that have happened to me, as well as my experience, at the middle mic. I do three rotations to make a 75-minute show.

BH: “Chappelle’s Show” was one of the most critically and commercially successful sketch shows of our time. Where has that show taken you since?

NB: It was a great and horrible experience. There were outstanding parts, but the end was horrible, but everything I have is from that show. I’d say I’m still a big “Chappelle’s Show” guy. I think there’s a lot to be proud of. It was interesting, it was unique, it was innovative. The sketches still hold up. I think they should, and I understand why they do. They hold up because Dave [Chappelle] is a beautiful performer and there’s an idea behind them. There are cool premises and unique takes. Dave [Chappelle] is the most watchable guy in the world. I think it’s charisma.

BH: This is a very politically correct time. How do you negotiate that in your comedy?

NB: I think there’s political correctness that people think is right and fair and other correctness that people roll their eyes at. It’s all about figuring out what’s what. There’s a lot of social justice warriors that are full of shit. They wanna use you to prove that your views are not what theirs are. For me, I spend a lot of time in racially diverse situations, so when people try to write me up for anything racist, I roll my eyes a little bit, because I could say to a lot of these people, “Oh, I didn’t see you at the black comedy show last night … ”

BH: When does comedy cross the line?

NB: The line is unfunniness or a complete lack of standard and morals. But I’ve seen people do funny racism jokes and funny rape jokes. If you’re talented, you can make fun of anything.

BH: You’ve directed ten episodes of “Inside Amy Schumer.” How was that experience? What are your thoughts on what she’s doing for women in comedy?

NB: My experience was great. I really love the show. Schumer’s m.o. is painting a picture of what it’s like to be a woman. You get insight of the double standards and hypocrisy and sexism that surrounds those gender politics and the built-in problems of being a human woman. She’s made a voice for herself — to me, that’s her victory.

BH: For you, what’s the hardest thing about comedy?

NB: Writing. Nothing in comedy is harder than writing.

BH: The podcast you hosted with a few other comics, “The Champs,” was named “Best Podcast” by the Los Angeles Times two years ago. What did you intend to accomplish with that medium? How did it work out?

NB: People thought we were racist because we would only interview black guests. But we weren’t being racist, because it’s complete inclusion. What I intended was a place where people could hear some of the smartest people discuss race relations in the modern era. I had some illuminating conversations with a number of people, like Dave [Chappelle] and Chris Rock. The idea behind that podcast was, “hey, you wanna hear a black person and a white person talk with no strain?”

BH: What’s next for you?

NB: I’m working on a few pilots that are more sort of in the John Oliver, Trevor Noah, Bill Maher, Colbert vein. I’ve always felt I could do that, so I’m working on those. It’s more personality based. I’m writing a movie with Blake Griffin. I’m hoping the “3 Mics” special will be good.