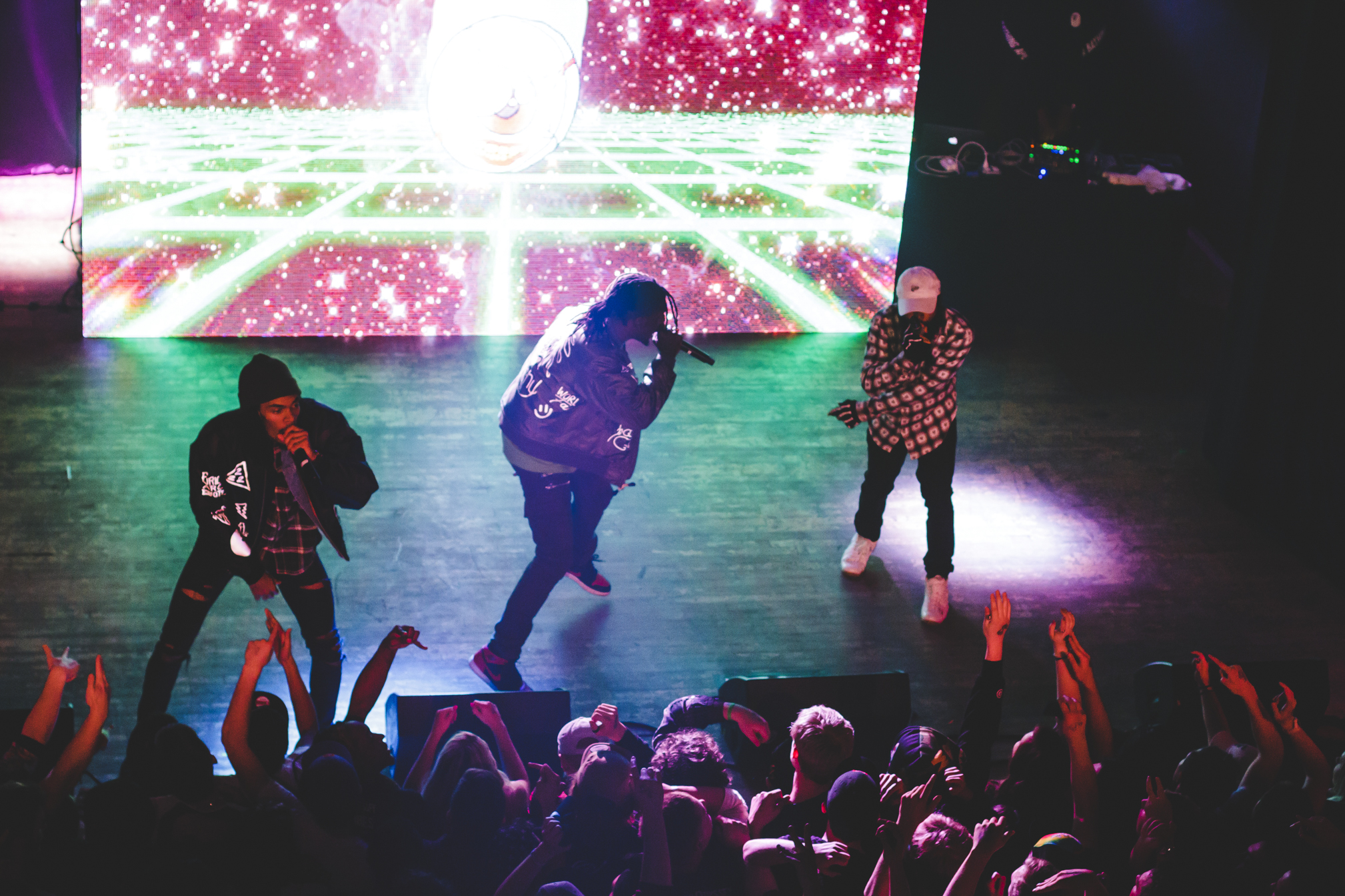 Chants of “FLATBUSHHHH! FLATBUSHHHH!” could be heard ricocheting off the walls of the Majestic Theatre from fans desperately pleading for an encore.

The Flatbush Zombies had just performed a set that no word short of extraordinary could describe, and will almost certainly stand out in the minds of audience members for years to come.

The hip-hop group hailing from Brooklyn performed much of their highly anticipated debut album last night, but the way they went about it felt like they had been performing it for years.

Flatbush Zombies’ newest album is rich with stellar production, lyrics, but falters with lack of consistencyEver since the Flatbush Zombies released the single “Thug Waffles” back in 2012, fans have clamored for a full-fledged studio Read…

To put it simply: Flatbush Zombies performed a hell of a concert, no —  a spectacle. They couldn’t have done it, though,  without the help of their touring openers: Remy Banks and A$AP Twelvyy. Each artist put on an energetic, yet quick set and knew their roles as openers well. They amped up the crowd with their songs and stage presences starting at 9 p.m. on the dot, and then left it before the crowd could get impatient.

Remy Banks ignited the crowd to action, leading a chant to get one of the audience members in the front their blunt back, and Twelvyy too ignited the crowd into a frenzy with long A$AP chants in between a few of his songs.

After Twelvyy finished his set, the crowd went mostly silent, aside from excited murmurings and mumblings. Three eerie pencil drawings flashed across the Majestic’s screen, each a biblical depiction of one of the Zombies: Meechy Darko, Zombie Juice and The Architect. Anticipation built steadily, as a floor audience of mostly devoted fans waited for their idols to come on.

Suddenly, a PSA came on the speakers — one similar if not the same as the one that opened their album, “3001: A Laced Odyssey.” And then, the Zombies took the stage, and what followed was certainly an odyssey, but one through consciousness rather than space.

They transitioned from the PSA to the rest of the album’s opening track, aptly named “The Odyssey,” and the Zombies’ talent in performing immediately stood out, as well how much the crowd loved them.

Each of the group’s members are incredibly talented in their own right, possessing strong flows and in The Architect’s case, production chops as well. These skills when performed live, though, are amplified ten-fold.

Meechy Darko’s voice reached a new level of sinister, Zombie Juice’s altitudinal vocals left the sky and went straight to the stars and The Architect’s production and underrated lyrics entered through the ears and set a path straight to the heart and mind of each audience member.

In addition, not only was every skill of the Zombies amplified, but every weakness masked as well. Any lack of consistency or concentration that was apparent on the album was masked and made up for by the superhuman effort that each member put on stage. It allows for the possibility the Zombies even meant for their tracks to be experienced live, not digitally.

They played mostly new songs, except for an encore that included a raucous production of “Palm Trees” that made it feel as if The Majestic was about to collapse.  The show was nothing short of a spiritual experience and lesson, which was concluded by Meechy Darko demanding that the audience “open their fucking minds.”

The highest highlights included a passionate performance of “Trade-Off,” which everyone knew all the words to despite it being released a year ago, a sing-along session of “Smoke Break,” as well as a variety of awesome graphics that accompanied each song.

The Zombies finished off their set all over the place — literally. Meechy Darko parted the floor, Moses-style, and then jumped into it causing mayhem. He would later stand on the back corner of the Majestic’s floor and stage-dive off of it. Then, after the last song, Zombie Juice emerged on balcony and gave a hilarious PSA about voting, or rather not voting for Donald Trump.

From this concert, one thing is clear: The Flatbush Zombies care about performing and the people they perform for.  Anyone interested in rap, music or enlightening experiences in general should see Flatbush Zombies whenever they get the opportunity. 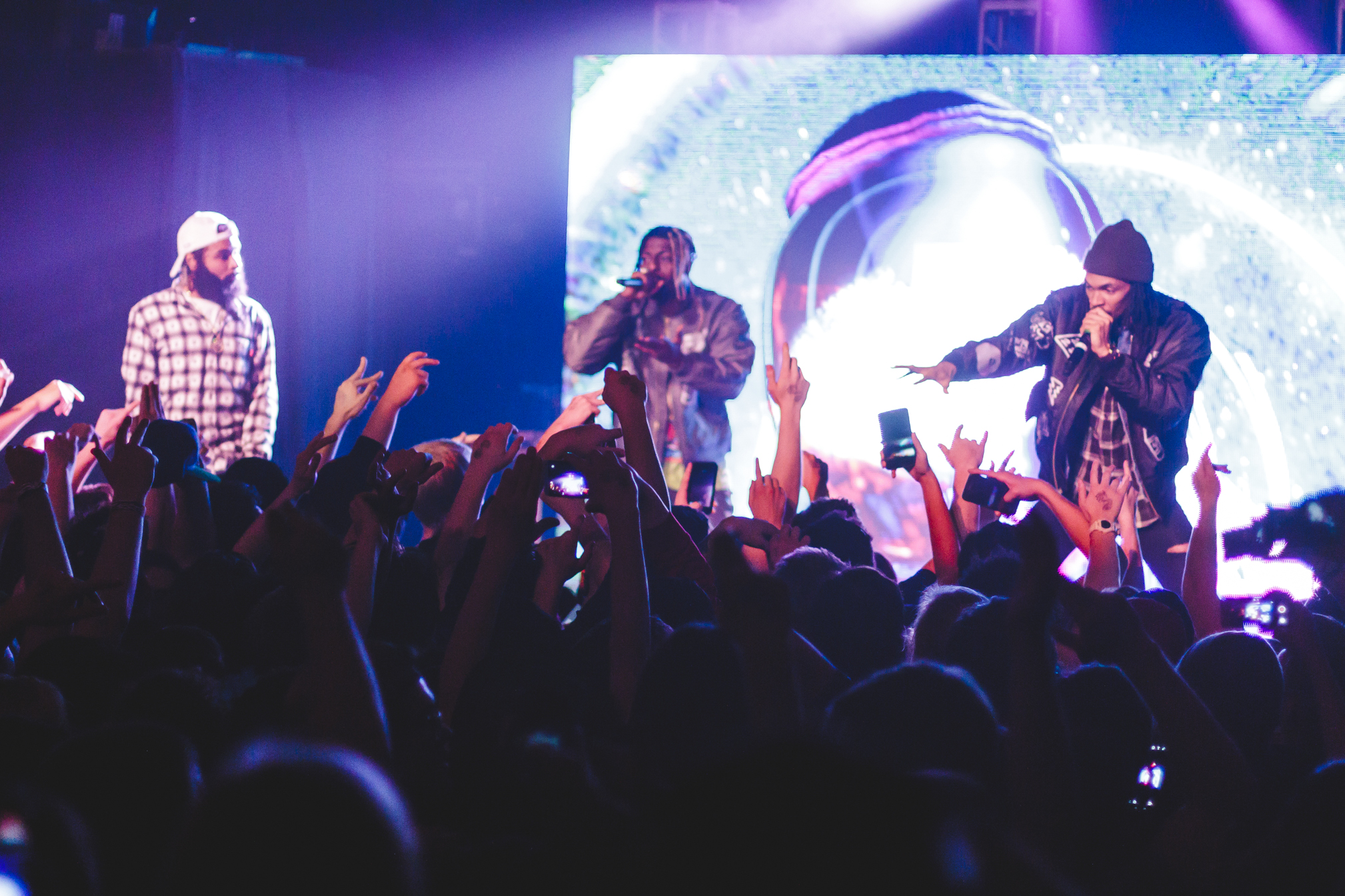