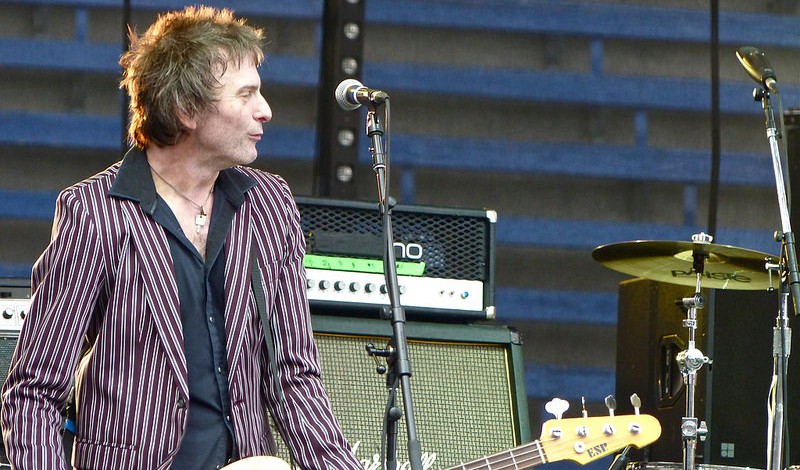 Though it’s been a little over 30 years since The Replacements hit their stride, former bass guitarist Tommy Stinson rattled the Frequency this past Friday for an abundance of middle-age fans.

Stinson, who helped found The Replacements when he was only 11 years old, showed he doesn’t need fellow Replacement Paul Westerberg to put on a rocking show.

Backed by a hodgepodge, yet impressive, band consisting of The Hold Steady’s guitarist Steve Selvidge, Stinson played a 60 minute set consisting of songs from his solo releases and songs from his previous bands — Bash & Pop and Perfect — combined with a few unreleased tracks.

After a painstakingly long 45 minute set break, Stinson took the stage and went right into a raucous, freewheeling punk tune which characterized the general sound of the performance. While Stinson’s discography consists of both punk songs and alt-country tunes, the latter were almost entirely absent Friday.

The Replacements’ trademark sloppiness and ad hoc attitude to performance were present in great quantities in Stinson’s show. Playing without a setlist, Stinson called out songs like a quarterback signaling an audible. More than once Stinson wondered aloud, “What [songs] do we have left?” He stopped a song midway and had to start over multiple times. The only Replacements hallmark missing was a flubbed cover song or two.

Most surprising about seeing Stinson center stage rather than stashed behind a bass on the periphery was his personality. Especially ornery through the first half of the set, Stinson balked at the microphone stand and grumpily asked, to no one in particular, “Can we get a new mic stand for fuck’s sake? And why is it so bright?” A new mic stand was promptly brought on stage and the lights were dimmed.

Soon after, Stinson was displeased with the static from the amp and had to amble to the back of the stage to try to adjust it. Visibly upset, Stinson angrily said, again, to no one in particular, “I can’t even get to my amp through all this shit.” The shit, in this case, being the keyboard and drums. To call Stinson grumpy would be a wholly accurate description of his stage presence.

The show did offer an interesting look into Stinson’s state. The Replacements lifestyle — not at all a sober one — may have taken its toll on Stinson. His frail appearance and thin, veiny arms paired with his erratic and unkempt hair, are a portrait of someone who perhaps took the rock star lifestyle too far. Stinson’s occasional unexplained, overly joyous and somewhat creepy smile at times hinted that he was in another place entirely.

The dark horse star of the show was Selvidge. He packed a serious punch into his riffs and effectively kept the show from sounding too monotonous.

All in all, Stinson put on a great show. It’s impressive he still has the stamina not only to tour, but to put on a fairly energetic and sustained concert. Stinson also succeeded in recreating the sheer emotiveness and rawness that made The Replacements popular. Undoubtedly, the middle-age crowd went home pleased.