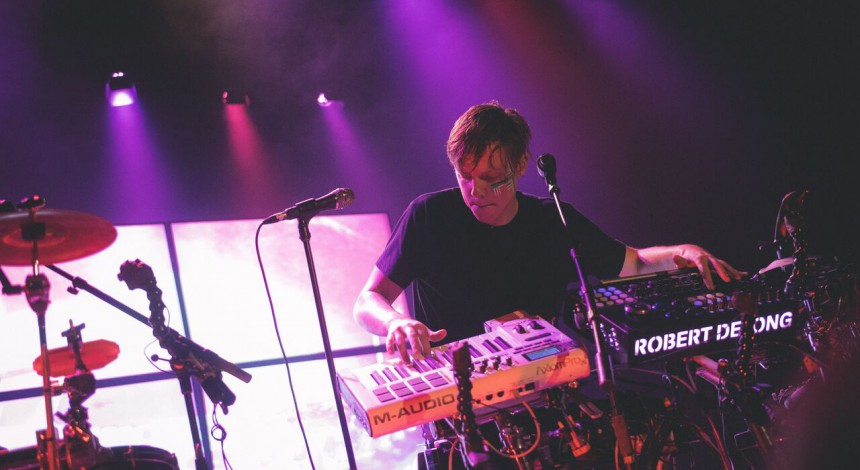 Before DeLong even stepped out before the audience, his setup foreshadowed an unusually instrument-heavy and revolutionary EDM show. Two screens projected trippy images of cats, pizza, mullets and Pokémon, with colors lining the sides of the stage. But between the screens sat the real meat and bones of the show — three drum sets, with crowded racks of keyboards, pads, synthesizers and guitars surrounding them.

With a bolt of energy and a neon painted face, DeLong ran out onto the stage weaving through the many instruments, stupefying the audience. He performed a high-energy opening number, simultaneously jumping, singing and directing queues through electronic pads with seeming ease.

Shortly after the first number, DeLong began to incorporate keys, synths and live drum sets into the mix as well, single-handedly alternating between the many instruments while carrying out vocals to assume the role of a one-man band.

Playing old songs, as well as songs off of his newly released album In The Cards, DeLong tossed drumsticks in every direction, freeing his hands when needing to hit all of his queues.

Despite ceaselessly running to and from different instruments, DeLong’s vocals maintained a smooth and powerful quality, enabling his meaningful lyrics to command attention. DeLong’s initial burst of energy remained constant, keeping the audience dancing throughout the entire show.

But DeLong went beyond simply maintaining his energy during songs — he filled gaps with transitions, playing intense yet intricate drum rolls and chanting synth-distorted lyrics to the audience.

On top of the already impressive array of instruments, DeLong also mastered a less conventional instrument — the gaming console.

A tech junkie, DeLong uses gaming consoles to command live music. At the show, he integrated a station controller and Wii console into the set, programming them to make electronic sounds.

With the Wii console in hand, he danced around the stage and interacted with the audience. He tossed the console into the crowd after breaking it at the end of the show.

As the performance came to a close, DeLong asked the audience if he could play a few tunes on the guitar — the one instrument on the stage he did not simultaneously play in part with the others throughout the course of the show. Though he held a guitar in hand, changing the dynamic of the show a bit, the music still held true to its pop-electronic sound and high-energy.

After wrapping up the tunes on the guitar, DeLong disappeared into the dark, only to return with an encore of the hit that placed him on the charts — “Global Concepts.” He reverted back to his multi-instrumentalism, swapping between the drums, pads, keys and synths while singing “Did I make money, was I proud? Did I play my songs too loud? Did I leave my life to chance, or did I make you fucking dance?”

And dance they did.