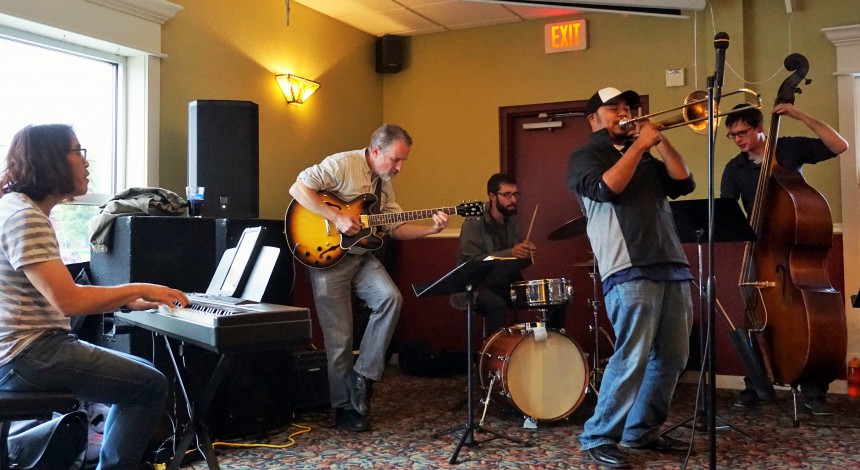 When Madison-area residents gather at the Bourbon Street Grill two Sundays every month, it’s not because the Green Bay Packers are playing.

Instead, it’s to hear the Madison Jazz Jam improvise to a variety of genres with amateurs and experts alike.

On Oct. 4, when the song ended with the horn fading out on a dissonant note and a few punchy thumps from the drums after a bluesy jazz standard, the audience clapped.

“I love that tune,” guitarist Doug Brown said afterward. “We decided to change tempos in the middle, and shortly thereafter I got completely lost.”

Bob Kerwin, a saxophonist, founded the nonprofit organization six years ago after noticing the need for an accessible jam session in the area.

Some players are professional musicians; some only know a few songs and are completely new to jazz improvisation. The youngest are in eighth grade and the oldest are in their 80s. Kerwin believes the most important thing new jammers need to learn is how to play together.

“You’re basically arranging the tunes on the fly,” Kerwin said. “That’s what a lot of the discussion between band members is about.”

In the first half of the jam, the house band members, experienced musicians there to help educate new jammers, give commentary after songs.

Kerwin is closely involved during this jam. He scans the room and invites new people to the stage for each piece, saying things like, “We’re going to bring Amos up on his trumpet,” and “John, you could probably use another tune.”

John Wanner is an older man who sat in the front of the room and enjoyed the first few songs over dinner and a glass of wine. When Kerwin called his name, Wanner grabbed his song book and joined the Madison jazz jam for Frank Sinatra’s “In the Wee Small Hours.”

Wanner is a retired high school chemistry teacher. He’s devoting his retirement to his passions: traveling with his wife and singing.

“I would’ve loved to have been a backup singer for Motown,” he said. “I just love those harmonies.”

Many people at the jam feel compelled to give music a meaningful place in their life. Kerwin himself is a family practice and emergency room physician who works part-time to fit in music. He said he values his time more than money.

Kerwin compared learning to play jazz to the years he spent in medical school, the amount of time and the amount of information he needed to make second nature was comparable, he said.

“I think it’s a common misconception that this stuff is appearing out of thin air,” Kerwin said. “Instead, you’re working to memorize and develop a vocabulary and then you combine those words and phrases according to what you want to do.”

Many people come to every jam. Mark Ramirez, a pianist, and Darren Sterud, who plays multiple instruments, but specializes in trombone, are both members of local bands and often attend the New Breed Jazz Jam at the Cardinal Bar. Darren also teaches music in two high schools. But despite their busy schedules, they’ve continued their involvement with the Madison Jazz Jam.

“[I want] to support it happening,” Sterud said. He pointed to the bass player currently on stage. “I’ve never seen her here before. You find surprises like that at these things.”

Attendees sometimes spend three hours at the jam and only play one or two songs. Getting on stage is simply not always the point for the Madison Jazz Jam.

“Jazz is not just a music genre, it’s a subculture,” Ramirez said. “That’s why I’m here. I feel connected.”

For more information about Madison Jazz Jam, including a schedule of upcoming jams, visit MadisonJazzJam.org.