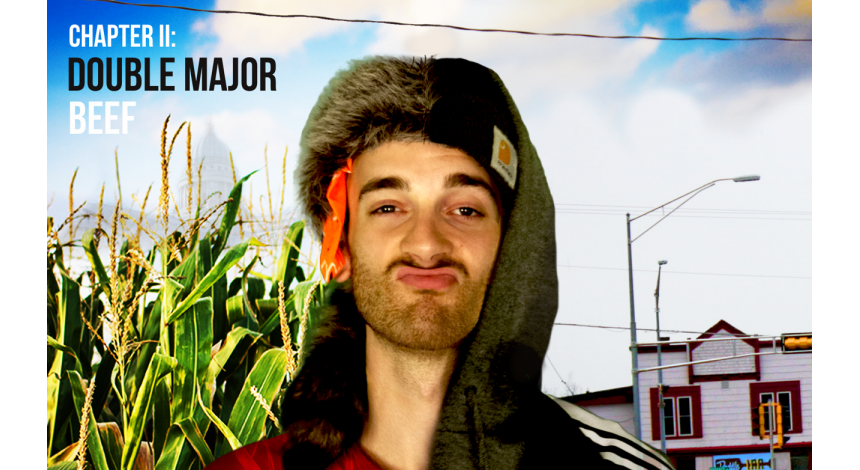 Keg stands and “Jump Around” are just a few ingredients that help make the University of Wisconsin the number one college football town in America. But, since 2010, Madison’s game day has not been complete without “Teach Me How to Bucky.”

The viral video showcases everything from band leader Mike Leckrone with his drumline to a dancing Chancellor Biddy Martin.

The video’s millions of viewers can thank a certain UW alumnus: Beef.

Clifton Beefy was the rapper everyone saw and heard rap in Teach Me How To Bucky back in 2010, and now in 2015, Beef is out in Los Angeles working on his second studio album Chapter 2.

With a name like Beef, the rapper raises the question of how serious he might be about his music. But, his lyricism exhibits how committed Beef really is to his craft.

The rapper describes himself as a poet; his music is “about the words.” Beef attributes writing poetry at a young age as foreshadowing for his future lyrical aptitude.

The former Badger’s depth can be seen in his new single, “Outer Space.” The track discusses depression and loneliness, creating a parallel between the emptiness of space and mental illness. The uncanny and psychedelic samples are key features in the tone of the song.

“It is me going through hell and how to navigate it,” Beef said.

He said it’s possible to be lost in the midst of the desolation; but the project signals the light at the end of the tunnel.

Despite its galactic title, “Outer Space” features some familiar faces; two of Beef’s past collaborators, Phonetic ONE and Zu, are former members of UW’s First Wave program. Though he was never a formal member of First Wave, Beef always collaboratd with the talented group of individuals, and he cites the pair as the song’s “heart and soul.”

While Beef is originally from the north side of Madison and spent a lot of time on campus, he is hoping to channel the south side in his work. It’s the harder, run-down side of Madison — one most UW students don’t get to see —  which becomes the basis for a lot of Beef’s lyrics.

UW is a huge institution that, often, leaves people to fend for themselves, which Beef said made him more independent as a musician and businessman. He said he wants to bring the importance of a collective community to UW’s campus, because it’s something people shouldn’t take for granted.

This is a pursuit the rapper doesn’t take lightly; Beef’s first release, Zooniversity, is a UW concept album about his alma mater. It’s an album made to be relevant to the typical UW student, including a song most coasties know as the bane of their existence, “Coastie Song.”

Beef may be out in LA now, he is always repping his hometown on the West Coast because — as Beef himself puts it — “I got some Wisconsin shit to say.”