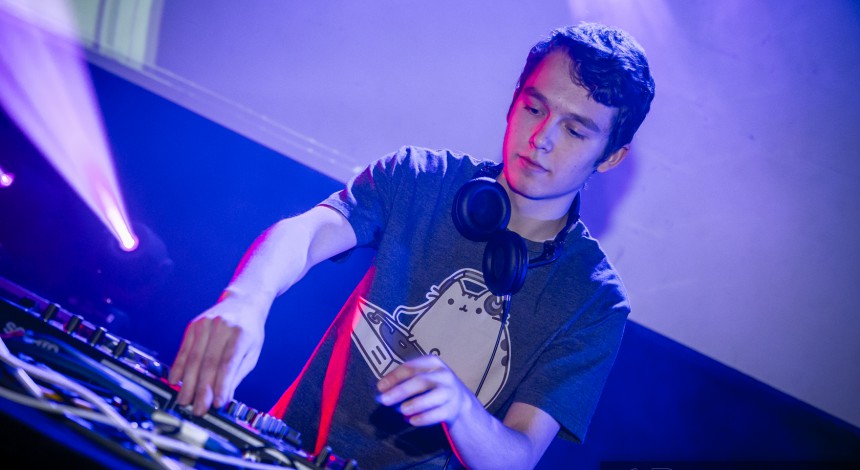 Most college-bound students don’t start their academic careers with 30,000 Soundcloud followers. Jeffrey Melvin, also known as Melvv, is an exception.

Melvin is both a University of Wisconsin freshman, and a rising music producer and DJ, with an affinity for creating uplifting electronic music.

For new listeners, Melvin’s music can be loosely defined as electronic and house-esque; he describes his sound as “happy,” “light” and “cute,” with quick melodies infused with nature sounds.

Today, tracks like “Glide” and “Vibe” have thousands of shares and plays on Soundcloud.

His unique sub-genre stems from a darker time, Melvin said.

“I was very depressed for a while, so I basically wanted to make myself happy,” Melvin said. “Making happier things made me happier. I would listen to it to cheer myself up.”

Creating music became the fuel for Melvin to keep his spirits high and perspective optimistic. But, like many up-and-coming producers, his beginnings were humble.

Growing up in Cedarburg, Wisconsin outside Milwaukee, Melvin found his passion for music at age 12 after watching Daft Punk’s live performance “Alive 2007.”

“I loved the light show, the mixing,” Melvin said. “All the equipment they used was insane. I was so young and just getting into music. It really connected with me because I knew that computer music was accessible too. So right then I knew I wanted to learn.”

The next Christmas, Melvin received the program Logic 9, which would be his mixing companion for the next five or six years. Melvin locked himself away that following summer and worked hard to overcome the obstacles that accompany every artist’s beginning.

Before long, Melvin began to pull his own weight via an addictive sound. But, despite laying tracks in nearly every state for thousands of onlookers, Melvin’s musical journey has taken a surprising turn toward UW’s campus.

Madison as a springboard

Melvin never planned for his music career to take hold in Madison, but his parents have made it clear there will be no financial support for artistic endeavors. Subsequently, Melvin is struggling to find a balance between his dreams and a college education.

But, Melvin sees plenty of opportunity in both Madison’s music scene and his classes.

“I went to a really small private high school, so I always crave a big audience and big schools, lots of people to talk to, networking and marketing, that kind of thing,” Melvin said. “So this school is kind of perfect for that. The huge student body is amazing too because there are lots of people to throw parties with so I can play different events.”

Even as welcome week hangovers are just beginning to fade, Melvin has already booked one show for December 5 in Milwaukee with fellow performer, Mija, with more shows to come.

If there is one piece of advice Melvin wishes to instill in his fellow Badgers, it’s to discourage “passive listening.” He believes music is more enjoyable if listeners stray from the Billboard 100, and analyze the elements within more complex songs. Melvin himself did not appreciate music’s true potential until he started making it himself.

It’s through music that Melvin expresses emotion, to both himself and his audience.