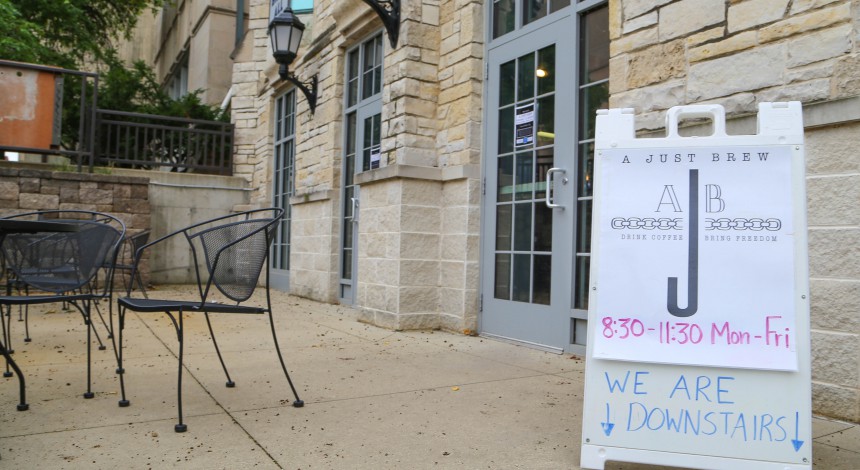 This autumn, some University of Wisconsin students hope to draw peers away from the cult of Pumpkin Spice Lattes to offer craft coffee that makes a global impact.

“A Just Brew,” situated in the lower hall of Pres House church, is their solution. In their cozy space below street level, newly trained volunteer baristas serve up fair trade brews every weekday from 8:30 to 11:30 a.m. to address modern day slavery and sex trafficking at home and abroad.

“Our goal is to have people switch their coffee habits from Starbucks and come down to this space, get their daily coffee and learn about the problems of modern-day slavery,” Matthias said.

Mackett felt called to action after hearing that nearly 36 million people are currently forced into modern-day slavery. After hatching the coffee shop idea, he decided they would donate all additional profits beyond operating costs to International Justice Mission.

This organization, consisting of hundreds of lawyers, investigators, social workers and activists, works to combat slavery and sex trafficking through rescuing victims, bringing criminals to justice, restoring survivors and strengthening justice systems throughout the developing world.

“A Just Brew” has also paired with Denver-based Huckleberry Coffee Roasters in their mission against global and domestic violence. Matthias said the group reached out to local roasters, but they didn’t offer them wholesale prices like Huckleberry did.

Each cup of their signature light roast coffee costs around $0.65 to make. “A Just Brew” operates off of donations, so every additional dollar beyond this goes directly to International Justice Mission.

Last semester, Matthias said their cafe went through 93 pounds of coffee. Their team of 10 volunteer baristas served more than 1,900 cups, amounting to over $4,000 that they then donated to International Justice Mission.

They initially started off operations in friends’ homes, but in January moved to their current location in University Presbyterian Church and Student Center’s basement where they pay a small hourly fee to operate. Beside their cafe, they also cater to events at Upper House, a Christian-based organization for students.

While the group’s founders aren’t affiliated with the Presbyterian Church, they are Christian and feel their faith has helped lead them to this mission. Matthias said he hopes the cafe’s location might also promote the work and offerings of Pres House for students on campus.

“We want to encourage people to go to church and get plugged in,” Matthias said.

Beside tackling global and domestic issues of violence and trafficking, the founders also have a simple focus on creating a space for camaraderie and hospitality.

“One of our core values is to make people feel known in this place,” Matthias said. “I try to go up to people and have a conversation with them — something that’s not typically done at a coffee shop.”

“Our goal is to have people off the street come down here and … become more aware of what’s going on,” Matthias said. “There is this kind of stuff happening [sex trafficking] in Madison and places like Chicago.”