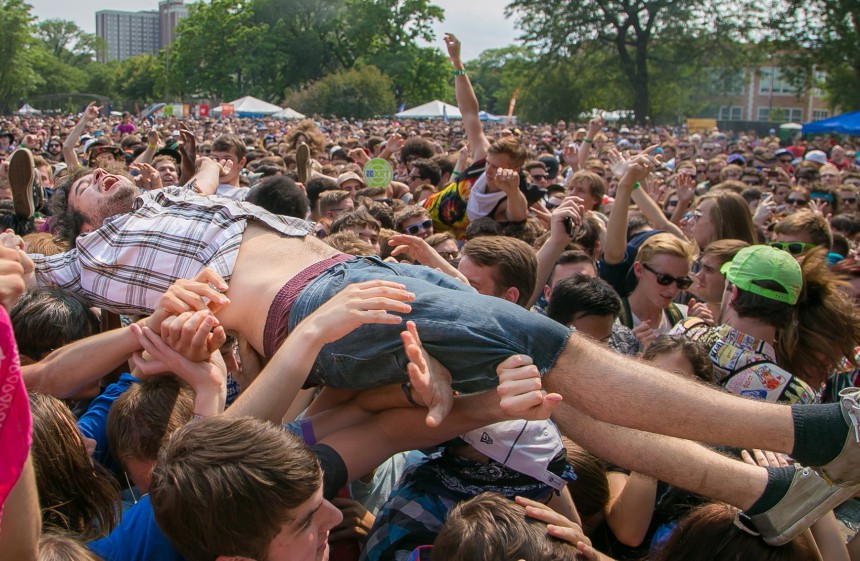 Since Jimi Hendrix enraptured the muddy masses at Woodstock, music festivals have become synonymous with summer good vibes. Fortunately the Midwest boasts some of the best, and here is a guide to decide which is right for you.

Pitchfork Music Festival organized by the musical publication of the same name, functions as an alternative to Lollapalooza’s neon crop-top mania.

This year headliners Sleater-Kinney, Wilco and Chance the Rapper are sure to please the roughly 50,000 concertgoers looking to avoid young Chicago suburbanites clutching their Urban Outfitters flasks and parent’s credit cards. And despite the relatively large attendance, Union Park still gives the option of lounging or going hard.

This summer will be no exception; Pitchfork is turning 10, and they are truly celebrating. In addition to the headliners, Future Islands, the New Pornographers, CHVRCHES, Run the Jewels, Mac DeMarco, A$AP Ferg and many others will be taking over their dual stages.

Pitchfork will also house a Caterie Craft Festival to celebrate 40 artists. Plus last year everything from Goose Island IPA to vegan gyros were offered.

The festival serves as a great inaugural festival experience, or simply a break for those sick of increasingly high ticket prices and crowds elsewhere. Feel free to bring friends or even your parents.

And compared to other music festivals, the price is right. A three-day pass is $150, with each individual day available at $65.

General mood: Taking a slow drag from a Pax vaporizer in a meadow on a clear, starry night.

Turn-up levels: A quick pull of herbally-infused vodka and a few local brews, aka two and a half shots.

Eaux Claires is the latest addition to the music festival circuit and for the most part, has remained under-the-radar. This may simply be due to marketing; rather than employing colorful posters and a long, elaborate name, Eaux Claires opted for minimalist design and quiet pride in its Wisconsin origins.

This doesn’t came as a surprise when considering its founder: Justin Vernon, aka Bon Iver. Famous for his Badgerland cabin-dwelling and wintry, melodic tracks, Vernon has decided to bring his distinct vibes to a multi-stage experience this summer.

And he has brought along several of his largely Midwestern friends to make the inaugural year an enticing prospect. The National, Sufjan Stevens, Indigo Girls, Sylvan Esso, Doomtree, PHOX and Spoon are several of the acts who will grace the two-day festival.

In addition to the impressive indie line-up, Eaux Claires offers a unique venue. In true Bon Iver fashion, the stages and other attractions will be housed in a forest near expansive campgrounds, enhancing the atmosphere in a way other wide-open, flat parks cannot accomplish.

Not only are these campgrounds available for concertgoers, but dorm rooms at University of Wisconsin-Eau Claire are also available for rent during the festivities. Two-day general admission passes are available for $135.

Lollapalooza is one-of-a-kind. It’s a microcosm of the music world, a massive conglomerate of festival stereotypes and genres. Most festivals cater to a niche group of the music world, to the neon tank-top wearing EDM bros, the too-cool-for-anything hipster bunch, the trendy, floral know-it-alls or the adventure-seekers who are more concerned with finding molly than hearing emerging artists.

Lollapalooza, however, welcomes all festival goers with open arms on six main stages in the heart of Chicago’s downtown Grant Park.

The massive popularity of the festival has been building for years because it draws such a wide array of music fans. EDM listeners can rave all day at Perry’s stage to the likely stylings of Dillon Francis, The Chainsmokers and Bassnectar. Casual indie chillwavers can peruse the grounds listening to Tame Impala, War On Drugs, Flying Lotus, Father John Misty, T.V. on the Radio and a host of others. Mini-trap lords can bounce to A$AP Rocky and Carnage. And everyone can come together over legends like Paul McCartney, who is headlining Saturday.

While you still might see some little squirt running around amid the open drug use and topless women at festivals like Bonnaroo and Electric Zoo, Lollapalooza is actually family friendly. In fact, kids under 10 get in for free, which is a shocking bit of information for the multitudes of fans who missed out on general admission tickets that sold out largely within the hour they were put on sale.

Lolla is marketed as a cultural experience; they offer various other events in addition to music. Lolla has its own farmer’s market that samples local food and wares from the other (overpriced) options across the way. A collection of local, national and international vendors sell “environmentally responsible goods,” such as festival clothes and accessories on Green Street.

Unlike many of its contemporaries, Lolla is located in the center of a massive sprawling city. This makes it extremely hard to find a cab after the show, but when those fireworks go off at the end of the night, illuminating the skyline and the thousands of other drunkards swaying to the beat, it’s one hell of an experience.

Hipster-o-meter: Two out of five beards.

Turn-up level: One hidden water bottle of vodka, two extremely expensive beers and a swig from a stranger’s flask, aka three shots.

Summerfest is essentially the best county fair in the country. The yearly music festival is located on the same turf as Irish Fest, Polish Fest, German Fest and Pet Fest, as well as a few others. However, the overworked grounds will host a surprisingly diverse lineup of established artists over the 11-day span.

Summerfest prides itself on being “the world’s largest music festival.” Although Donauinselfest in Austria draws in more than 3.2 million festivalgoers to more than 2,000 acts on 21 stages, and Mawazine in Morocco draws 2.5 million for 90 acts on seven stages, Summerfest comes in as a close third.

With 900,000 attendees, more than 800 acts and 11 stages, Summerfest is undeniably huge, but subsequently less organized. Untamed families and reckless high schoolers trying to get turnt roam the grounds haphazardly, standing in front of stages and squatting in nearby bleachers.

But more importantly, The Rolling Stones are kicking off the festival at Marcus Theater June 23. This will be their first time performing in Milwaukee in 10 years.

Summerfest differs from other festivals in its relatively cheap general admission tickets. However, festivalgoers must buy tickets separately for the main headliners, which can get pricey. For example, The Rolling Stones starts at more than $90.

But with 45 food and beverage vendors, attendees will never run out of Wisconsin festival food and cold Miller Lite to help them through the inevitable craziness.

General mood: Getting drunk with your family on Thanksgiving and watching a “really good music video” with your kinda weird uncle.

Turn-up level: Get your cool friend’s older brother to buy you beer, aka two shots.