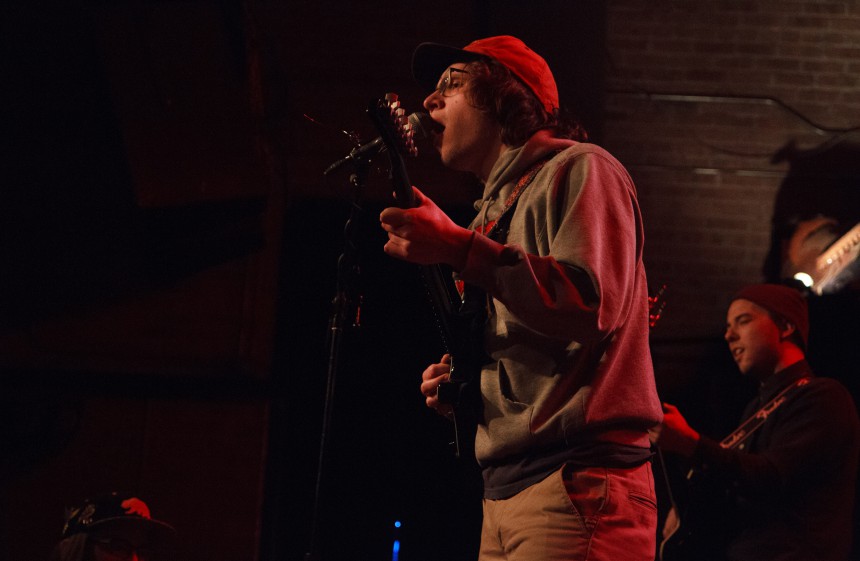 Madison band Dolores’ spunky, psychedelic rock is infectious and their charisma is unbridled.

Frontman Javi Reyes dances goofily and bounces around the stage; bassist Willie Christianson seems to have a smile permanently etched on his face; keyboardist Adam Thein steadily churns out funky, psychedelic melodies; drummer Teddy Mathews is lively behind the drum set. It all comes together to create a lively, enjoyable show.

Their goal is to play memorable shows, but their recordings prove to be just as enjoyable. Nectar Fields, the band’s debut EP released August of last year, is a display of everything good about psychedelic rock. From the poppy, upbeat, almost ridiculously catchy “Fight Fire With Fire” to the more spaced-out “Philly’s Got a Plan,” Nectar Fields has way more polish than would be expected from a band’s debut.

To trace the origins of the band, one has to go back to the fall of 2011 in Minneapolis. Reyes and Thein were in a guitar store when Tein observed Reyes messing around on a banjo. Thein joined in, “creepily … playing along on a bass.” Reyes was living with Christianson in Madison, and when Thein moved to Madison they began to jam together. That winter they started work on their own recordings, which would turn into Nectar Fields. After the release, Mathews was inspired to get in touch, and he was quickly integrated into the band.

Last fall playing the band started playing basement shows, notably at the Spanish Mansion in downtown Madison. Soon afterwards, they began to book opening sets at more established Madison venues such as The Frequency and the High Noon Saloon. The band also toured with notable Wisconsin band, PHOX, for a few dates around the Midwest earlier this winter.

Dolores owes part of their emergence to an unexpected shout-out from PHOX frontwoman, Monica Martin. In October Martin tweeted, “HOLY SMOKES, just heard of a new Madison, WI band. So happy for our lil scene,” with a link to download Nectar Fields. PHOX’s main Twitter account retweeted it, reaching its more than 7,500 followers.

Dolores hopes it can give another band a similar boost someday. They are proud to be part of the rising tide of music in Madison and are optimistic about the near future of local music. Although only Mathews is originally from Madison, the band is now well-ingrained in the local scene.

“The more involved we become with the music scene, the more hidden gems we keep discovering,” Thein said. “We really think the music scene here is on the rise and are excited to be a part of it.”

Recently they have been using their live shows to try out tracks that may be on their forthcoming EP, Peach Fuzz, including their latest single, “Man at the Market.”

Mainly influenced by psych-rock acts like Tame Impala, Pond and Unknown Mortal Orchestra, the band but also cited classic rock acts such as the Grateful Dead and Steely Dan as sources of inspiration. Throw in some funk and soul influences like The Swampers and Funk Brothers, and you arrive at Dolores’s unique sound.

While this sound served them well on their debut EP, they promise “heavier drums, denser production and a little more focus in the sound of the band” for Peach Fuzz, Thein said. The expected release date has been pushed back, but Thein is confident it will be released sometime in March.

Following the release, Dolores will likely play more Madison shows. The band has a fun, laid-back presence on stage, and the sight of Reyes’ dancing is an experience rarely matched.

“We try to be as inviting as possible and hope that everyone can take away something from our live set that they enjoy,” Thein said.

Thein says the band gets a varied range of responses when asking people what their favorite song of the set was, indicating they truly do offer something for everybody.

But despite the relatively warm reception, Dolores knows the harsh realities of being in a small, local band. All four members work day jobs and practice, record and play whenever they find time around their other responsibilities. Scheduling, communication, setting goals and finding time are some of the biggest obstacles of being a band, Thein said. Despite this, they say they are lucky to share common musical interests and visions for the band.

For a band named after a children’s book that teaches the alphabet, they are making some serious waves in Madison’s music scene.