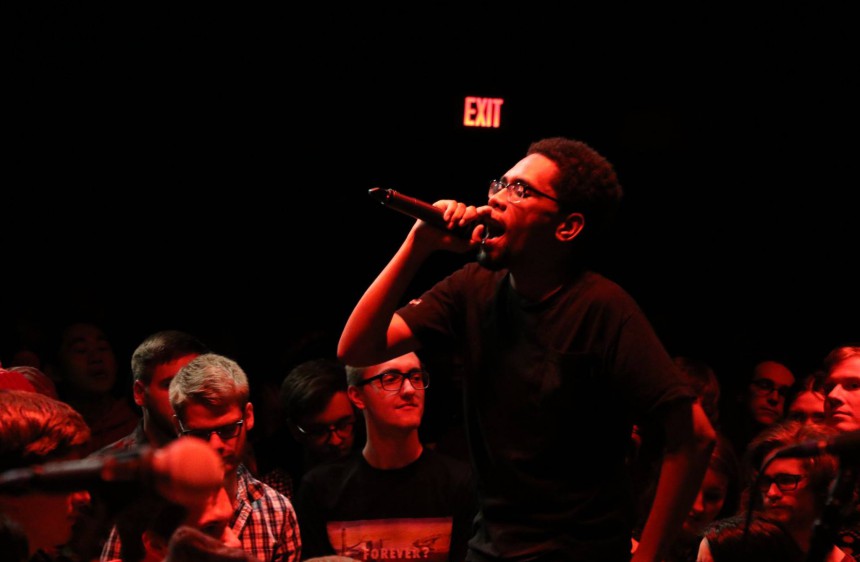 Chimes of classical music from Memorial Union’s upstairs grand piano rung through the union Friday night. But the galleries also hummed lightly with reverberating bass as the inside of the recently-opened theater resounded with saxophone solos, soulful harmonies and socially-charged rap lyrics.

The event came in the middle of Black History month, but was centered much more around the upcoming release of CRASHprez’s latest album, More Perfect, coming out Feb. 27. Michael Penn II, known by stage name CRASHprez, is a First Wave Scholar and University of Wisconsin senior.

Penn and his label CATCH WRECK booked the Play Circle because it is an underutilized space with a lot of potential to try new things, he said. This was CRASHprez’s first headlining show after years of opening for rappers like Lil B and Danny Brown and playing festivals. But for Penn, it is also about helping other Madison-grown artists overcome the hump of being merely “local” or “emerging” artists. Penn said those markers demean artists like him who are making real work and building their careers.

The Bellhops, a black music collective led by First Wave student Taylor Scott, started out the night with a smoother sound. Scott, Hiwot Adilow and Eric Newble Jr. carried the sultry and bluesy vocals. Keyboards, bass guitar, violin, trombone and drums backed them up and filled the room with palpable electricity that bolstered their vocal range and lyrical themes of womanhood and male relations.

First Waver and CRASHprez collaborator, Lord of the Fly joined Scott during the last few tracks of The Bellhops’ set to add an element of dissidence to their smooth, soulful sound. Lord of the Fly heightened the energy in the room with his rap set. His performance style can best be described as loud and bouncy; his white, heart-studded converse shone against the bobbing faces of the crowd.

DJ *hitmayng preceded the main act with a solo DJ set. *hitmayng produced the beats for CRASHprez’s album and collaborated on his last EP. CRASHprez and *hitmayng have a complex relationship that extends past the recording studio, like many of the other performers that night.

CRASHprez’s prerogative was to perform a show worth seeing, unlike modern rappers who tend to sell expensive tickets to shows and barely engage with the audience, Penn said. Penn cites First Wave, especially artistic director Chris Walker, as major influences in adding a theatrical element to his performance.

His set included a lot of performance art from thrashing his body around stage to his interaction with fellow rappers Lord of the Fly, ComPL3xX and pizza boy. UW communication arts lecturer Aaron Granat, was live streaming the show from behind the performers, which was mixed in with a video playing continually stage right. It included a reel of CRASHprez looking straight ahead, overlaid with images of fire, American flags and clips of President Barack Obama and Pharrell Williams. Granat, known as Kid A, has a firm grasp on CASHprez’s personal aesthetic and helps him develop that visually, Penn said.

CRASHprez performed his entire upcoming LP from cover to cover except for interludes and a particularly controversial track called “Hit That Django” by Yung Lil Shawty. It makes more sense contextually on the album than performed live, he said.

His performance teetered from emotionally-somber tracks to “lit up,” bass-heavy ones. But the topical themes of his lyrics remained consistent throughout his performance. In two words Penn explained the main driving theme: being black, but he elaborated.

“Death is all through this album, being black and being questioned, not being secure with all the parts of myself,” he said.

Track “40, 28” whose refrain goes, “40 ounces, 28 hours, no one hand should have all that coward,” is centered on a statistic that said an unarmed black person is shot every 28 hours, which has since been discredited by Politifact.

Although Penn is aware of its inaccuracy, he kept the line for its core idea.

“I kept it the way it was because I feel like the sentiment hasn’t changed,” Penn said. “No matter what it is, if it’s 28 hours, 36, 72, the sentiment doesn’t fucking change to me.”

Penn said the song was his favorite to perform because it allowed him to really be theatrical and engage with the crowd.

The night was a smorgasbord of artists helping each other out, drawing in crowds and keeping them there with a variety of powerful musical offerings from smooth jazz to politically-charged rap.