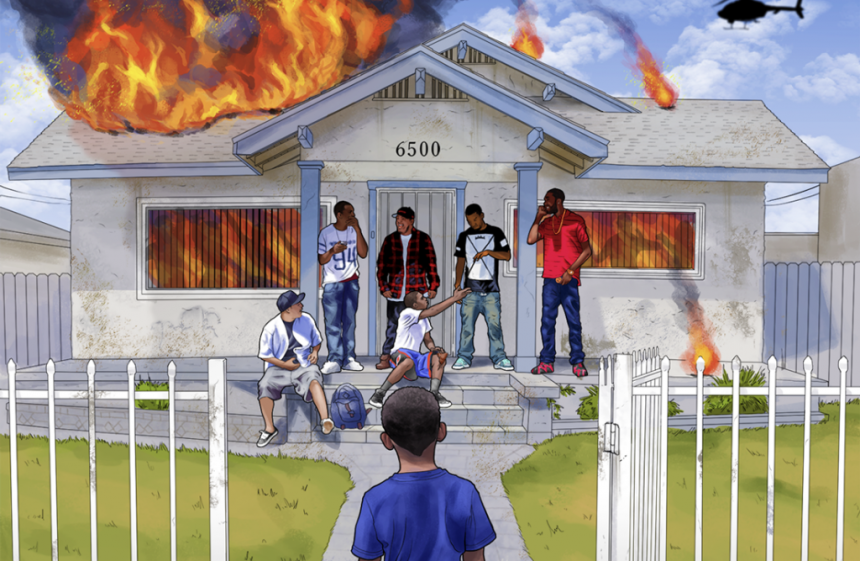 In many ways, Vince Staples emulates what it means to be a West Coast rapper. Like many other popular West Coast rappers, Staples was raised by a single mother in Los Angeles (Long Beach to be more specific), and grew up gangbanging. He said “literally everyone (he) knew” was involved in gangbanging.

Despite his story being pretty similar to other rappers who hail from Southern California, Staples still manages to set himself apart. Staples doesn’t bring the ornate storytelling ability of Kendrick Lamar, nor the penchant for writing a hype track like Schoolboy Q. He also lacks (for the better) the shock value brought by members of Odd Future.

What Staples does bring, however, is extremely valuable and definitely lacking in today’s rap scene. As evidenced in his latest project, Hell Can Wait, Staples is able to write a topically consistent, trim album that manages to convey meaning in a concise manner.

With only seven tracks spanning exactly 24 minutes, Staples has produced an EP that contains virtually no fluff. In a current rap climate that often seems overindulgent in its meandering track lists and endless guest verses, Staples wastes no time with unnecessary filler.

This structure makes the album very easily consumable, not that it’s light on packing a punch. Over the seven tracks, Staples addresses everything from growing up with a drug-dealing dad, to gangbanging as an adolescent to his problem with some women today.

The track that best shows Staples’ game, content-wise, is “Limos.” This track is largely a pointed critique of the type of women who throw themselves at men of Staples’ status. Staples explains the motivation for these women, “Looking for a nigga with the green shinin’ in the club / Trying to trade the hoes life for the red rose life.”

He goes on to claim that what women really want is “eighteen years with a check coming every month.” He throws a jab at the “Marilyn Monroes” who “use their wombs as ways to move forward.” As hard as these lines are, they all seem to set up the line near the end of this verse claiming, “Bastard child often lost in the story.”

All this occurs between hooks provided by Teyana Taylor, who samples from a Mary J. Blige song to try to convince you that she can “love you better.” Juxtaposed with the wary verses, tonality and motivation behind the hook becomes ambiguous.

Arguably the standout track from this tape is “65 Hunnid.” With a beat that makes it easy to unconsciously start bobbing your head, Staples employs double entendre throughout the song. Most of the lines in the hook and first verse can be applied in either a gang-related or sexual way. It’s actually a lot more intricate than it sounds.

The song doesn’t truly start until the second verse, though. Proclaimed by Staples himself as the best verse he has written, it artfully describes the perilous situations gang members can find themselves in. The theme pretty closely mirrors a lot of the presentation of peer-pressure that was so well purveyed in Lamar’s good kid, m.A.A.d. city. Staples and some fellow gang members are caught in an apparent robbery plot. Staples discloses some critical gang philosophy, such as “Don’t shoot for the skies or shoot for his soles/I told you before/That niggas gotta die for this shit to survive.”

This EP stands out for more than just lyricism. The production throughout the project is excellent. Featuring production mostly from Hagler, but also with No ID, Infamous and Anthony Kilhoffer, every track is crisp and clean while still featuring beats that could be imagined being played at a party.

Overall, for a major label debut (Def Jam), Staples could have done much worse. He managed to avoid making poppy, radio-ready tracks, and instead preserved his own style. This EP feels like a matured Staples, and definitely one to watch out for in the future.