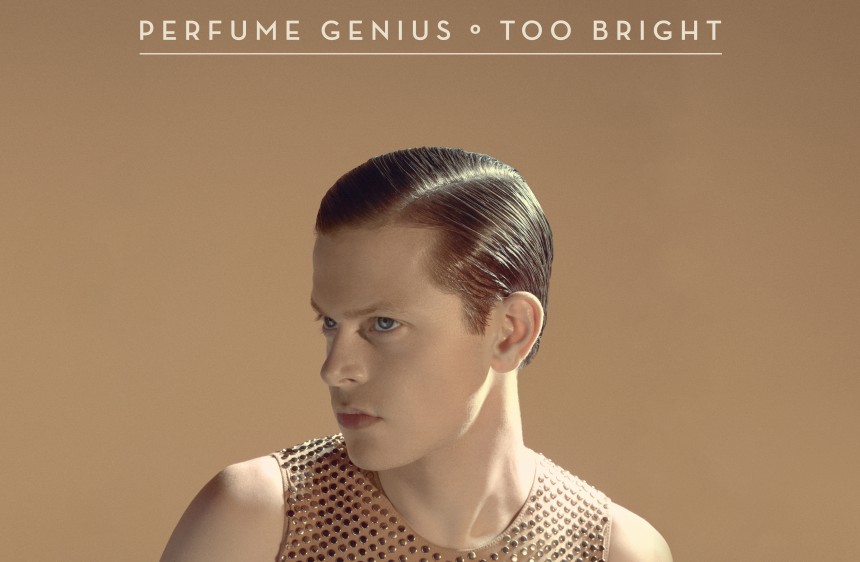 While there’s no shortage of Lesbian, Gay, Bisexual, Transexual artists in indiedom, there are few artists who have successfully imbued lyrical themes of queerness into their work. There are even fewer who have been able to match lyrics to music without sounding cliché. Mike Hadreas, the man behind the moniker, Perfume Genius, seems to have found that balance.

On his latest LP, Too Bright, Hadreas meshes brave, aggressive lyricism and grand, scintillating sounds in his best work yet. Citing the negative affects of homophobia on his psyche, Hadreas considers emotional pain and suffering two of his closest friends growing up. In an interview with the Guardian, Hadreas said, “I think now the victim part of me is leaving. But the anger is still there. And I think [the album] is me trying to puff up my chest a little bit and sort it all out.”

Hadreas does just that. On Too Bright, Hadreas carves out a unique space in indie music for homosexuality to sit uncensored. Speaking to some of the modern themes of homosexuality – drug abuse, isolation and body dysphoria– Hadreas paints a picture of what it is like to live in a ‘post-gay’ society. To Hadreas, it’s a fucked-up nightmare, an endless void of negativity, a rigid, heteronormative construct designed to simply ‘tolerate’ the LGBT community. No one cares if you’re gay anymore, but that’s precisely what Perfume Genius is trying to attack. Foregoing acceptance, society deems it sufficient to have a widespread tolerance of LGBT. It’s a separate-but-equal mentality that makes no room for the gender and heteronormative nonconformists.

“I like to think of myself as a very emotional person, but underneath it all I always feel like everything is kind of…pointless?” Handreas said in an interview with Wonderful Sound. “Sometimes I’ll see a good path and a bad path, and I’ll decide that they’re both to determined. So I kind of just turn them both down.” The pointlessness of existence, the vertigo of decision – these are some of the threads that run throughout Too Bright.

At its core, Too Bright features 80s synth revivals, power-ballads and dark, layered mixing as the album’s sonic backbone. Album opener, “I Decline,” invites listeners into a warm, intimate piano ballad that swishes by like a nostalgic, autumn wind. “I can see for miles/The same old line/No thanks/I decline,” Hadreas sings.

In fact, the lyrics of “I Decline” function as a motif later on in “Grid,” a Kraftwerk-esque post-punk track grounded by skittering drums, a full-bodied bass note and menacing synths. “Grid” rips itself apart and reconstructs itself into a hell-fire rampant with cultish screams and demented horns. Again, Hadreas sings, “I can see for miles/The same old line.” This time, he’s a lot more vehement as he comes face to face with his demons.

The video is a must-see. In the foreground Hadreas sits in white surrounded by androgynous dancers in full-body silver suits. They push and pull him as Hadreas becomes more bruised and bloodied with “Grid’s” increasingly tormenting motions. It’s a Kafka-esque tableau, vertiginous and menacing with seemingly no escape. Perhaps facing his inner demons is the only way Hadreas can see past the “same old line” of society’s ignorant heteronormative ideals.

Album standout, “Queen,” burgeoning itself as gay anthem of the year, features Perfume Genius’ most brilliant work to date. Lyrically, it’s half a self-deprecating acknowledgement of gay deviance and half a denouncement of homophobia. “Don’t you know you’re queen/Cracked, peeling/Riddled with disease,” Hadreas sings. However self-deprecating it may be, “Queen” asserts a kind of power and dominance in the way the song stomps along like a royal march, fiercely demanding the attention of all non-queens and expecting them to bow down.

Hadreas derives an unusual power from his flamboyance; a seemingly harmless gesture— a sashay— is enough to terrify passerby on the street. If being gay isn’t a big deal anymore, if we truly are in a ‘post-gay’ world, then what are people so scared of?

In response to homophobia, Hadreas told the Guardian, “If [people] see me as some sea-witch with penis tentacles that are always prodding and poking and seeking to convert the muggles – well, here she comes!”