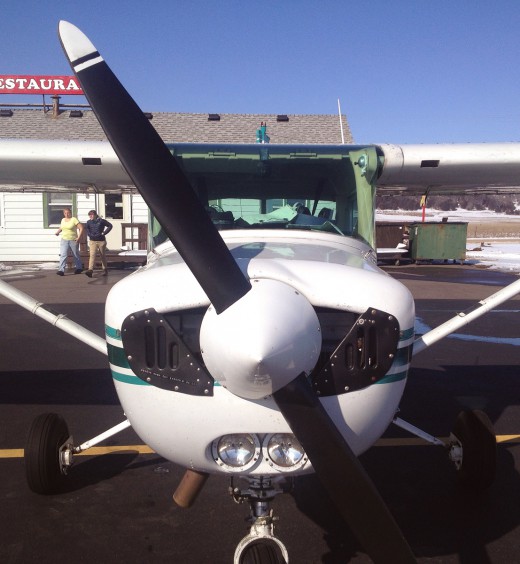 Before going into any further detail about the Badger Aviators, a group of University of Wisconsin students with a unique fascination for flying, I should make one thing clear: I wrote most of this piece within the confines of an Airbus A321 flying above North Carolina.

A man wearing an orange tie-dye tank top – sitting in first class, mind you – just held the flight up for an entire half-hour because he had lost a precious jacket whose value I can only imagine was more than $1000. Flight attendants out of the man’s earshot deservedly mocked him in the cabin. We are now scheduled to land in Chicago at midnight – one hour later than our scheduled arrival time. Earlier today, I relinquished my entire body to a machine that sees me in the same infrared, naked glory it sees every other airline passenger passing through a major American airport.

Just two weeks ago, though, I didn’t pass through security. I did not submit myself to the type of full-body scan that has made the American Civil Liberties Union cringe for a half-decade. Instead, I passed through a small building at Middleton’s Morey Airfield that could have doubled as a public golf course’s pro shop. An elderly woman staffed a counter that handed out rentals of small, single-engine airplanes as if they were study rooms at Memorial Library. No metal detectors or Transportation Security Administration agents were visible, just a few college students talking about their upcoming midterms and how perfect the day was for flying.

The Badger Aviators, currently led by UW senior Josh Gilberts and founded by senior Greg Oudheusden, were flying a quick hop to Lone Rock, a small community between Madison and Prairie du Chien that lays, as the Cessna flies, about 40 miles west of Middleton’s airfield. In the general aviation world, trips like this are called a “$100 Hamburger,” so named because of the $90 plane rental fee and $10 all-beef patty afterwards.
This is a somewhat regular routine for members of the club, a registered student organization that allows Badgers with any interest in aviation to learn the basics of flight and embark on fly-outs with general aviation pilots who double as UW students. The flight to Lone Rock is quick and cheap enough to be accessible on a student budget, and the next fly-out will be to an even more exciting location for an aviation enthusiast: Oshkosh.

After a quick preflight check and slamming a small door shut as if the small Cessna 152 were instead an old Fiat 500, Gilberts quickly yelled “clear” and pressed a few buttons. The propeller began spinning and the plane began a brisk crawl to the runway.

An armada of planes containing each member on the fly-out that day crawled along with us to the runway, making the airport seem busier than reality. It’s still not Chicago’s O’Hare Field.

One minute later, after a quick roll down a runway one-quarter the size of the smallest strip at O’Hare, the pressure underneath the aircraft’s wing exceeded the pressure above, and the plane lifted into the air.

This was no airline flight. A seat in the cockpit of a light aircraft gives a first-time general aviation flyer a more comprehensive understanding of flight’s intricacies; clear air turbulence bounces the aircraft up and down with more frequency than a flight cruising at 32,000 feet. To navigate, Gilberts dips the wing down to search for a water tower and spots one with Black Earth village’s name. That’s it. No Global Positioning System, no fancy heads-up display – just a well-trained eye. Gilberts has had his license since he was 17.

I briefly pulled my mobile phone out to snap a video of the landscape and maybe send my first Instagram from the air. Understanding that Federal Aviation Administration officials might be infuriated to hear that news, I quizzically ask Gilberts if it’s OK with him.

“I admit to texting and flying,” Gilberts joked. Like any good pilot, he never pulled out his phone while we were airborne. But I kept mine on and sent a photo of me holding the plane’s yoke while we cruised above Mazomanie.

The fly-outs don’t happen as often as most flying clubs because of the economic and time limitations of being a college student.

“Funding is probably our biggest hurdle right now,” Gilberts said. “We have many great resources for those who want to get a jump start in flight training, but when it comes down to it, flying is expensive.”

Because of this, Badger Aviators’ bread-and-butter element is a weekly ground school program held in the Mechanical Engineering Building.
Each week, Gilberts’ fellow licensed pilot Kelly Abplanalp takes interested students through a lesson on the fundamentals of flight and later heads back with a group to a lab containing a complex flight simulator.

The ground school contained a full spectrum of different experiences and skill sets. One man had just taken his first flight at the controls of a small aircraft – another is a seasoned pilot with a Certified Flight Instructor license. But when they take the controls at the simulator, which is so complex that it has an air traffic control terminal, rudder pedals and a fully-functioning yoke, an equal standard of concentration paired with enthusiasm sets in.

I tried it myself, and with a little help from Chris Johnson, the postdoctoral researcher who manages the simulator, I managed to take off from Truax Field in Madison and land across the lake in Middleton without seriously damaging the imaginary aircraft. Johnson said the simulator contains thousands of dollars worth of equipment and allows both student pilots and researchers to study the intricacies of flight.

Badger Aviators is still a small group mostly composed of engineering or hard science majors because of the scientific nature of aviation. But Gilberts says enrollment is growing and he hopes the group will attract more members with more activities in the years to come.

UW is the kind of place that is always surprising for its unique variety of intellect offered to a pretty normal group of 40,000 people. But oftentimes we curl into our academic pigeonholes, refusing to venture out of the hard sciences or the humanities because it’s “too hard.”

I’ve been guilty of that – my mediocre math grades in high school haven’t helped. But accepting an invitation to fly with Badger Aviators – a group of students largely composed of science students whose academic interests are completely antithetical to my own – was one of those harmonious experiences where UW’s intellectual expanse comes into full view.